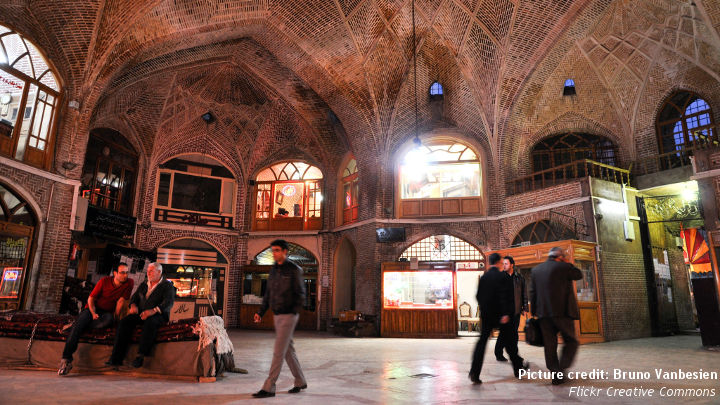 Iranian Azerbaijanis have historically been considered the country’s most loyal ethno-linguistic minority. Predominantly Shiite, with religion being the most important source of collective identity, Turkophone Azerbaijanis had until the 1920s provided numerous dynasties to the Persian thrones. From Seljuks to Qajars, they stayed at the avant-garde of the Persian empires and shielded them from the major Sunni rival, the Ottoman Empire.

The rise of nationalism in the 20th century gradually breached the image of Iranian Azerbaijanis as a perfectly loyal community. For a tiny group of Iran-born Azerbaijani intellectuals in the first decades of the last century, the (re)discovery of ethno-linguistic identity, distinct from Persian, upgraded the populations of the Caucasus and Anatolia to the status of brethren. This raised concerns in Tehran over the fate of the strategic northwest should Iran’s largest ethno-linguistic community seek separation from the rest of the country. These fears were heightened when in 1945, Iran’s Azerbaijani provinces were established by the Moscow-led People’s Republic of Azerbaijan. Lacking popular support, the Communist-inspired puppet republic failed to survive the Soviet withdrawal and disintegrated well before the influx of the Iranian military.

A mere year of intermezzo of Iranian Azerbaijan’s de facto statehood still led the Iranian monarchy to adapt increased efforts to ensure the country’s northwest remained part of Iran. Assimilatory policies intensified in the post-World War II decades. These were aimed both at the potentially disloyal members of ethnic communities but particularly at Azerbaijanis. Masses of Iranian Azerbaijanis assimilated into the Persian mainstream. This was due to internal immigration of millions of Azerbaijanis to Tehran and the country’s other industrial areas, the lack of education in their native tongue, and certain stigmatization stemming from being a Turkophone Azerbaijani in Iran.

The Islamic Revolution of 1979 initially brought about attenuation of state-imposed Persian nationalism. This was eventually replaced by the shared religion, Shiite Islam, as the ideological foundation of the emerging Republic. Yet, the situation gradually shifted during the 1980s and 1990s and Persian nationalism and assimilation policies returned to the forefront of state policies.

Nevertheless, the situation in Iran’s Azerbaijani provinces had already begun to change dramatically since the early 1990s. This was largely driven by developments outside Iran. The dissolution of the Soviet Union led to the establishment of an independent Azerbaijan to the north of the Araxes River- a source of immense concern for Iranian authorities, particularly in the light of the mounting Armenian-Azerbaijani war over Nagorno-Karabakh. This war threatened to jeopardize the Islamic Republic’s security by spilling over to Iran’s Azerbaijani-majority provinces. The war also served as a source of inspiration for masses of Iranian Azerbaijanis eager to rediscover their “northern brethren” following decades of mutual isolation. In a similar vein, the economic and political rise of Turkey led many Iranian Azerbaijanis to rediscover their ethno-linguistic and cultural roots and reconsider their Turkic heritage as a source of pride. As a result, roughly over the last 25 years, many Iranian Azerbaijanis have become more proud of their unique cultural heritage.

There is also an important international dimension of Iranian Azerbaijan’s ongoing transformation. There are two states – Azerbaijan and Turkey – with their dominant population ethnolinguistically and to an extent also culturally very close to Azerbaijanis. Since the establishment of independent Azerbaijan in 1991, many Iranian Azerbaijanis, particularly those of secular and nationalist mindsets, have both enthusiastic and romanticized attitudes toward very statehood of the Republic of Azerbaijan. On the other hand, the division in the first half of the 19th Century of Azerbaijani-majority territories into the Russian-dominated north and the Persian-dominated South brought about the formation of cultures that are, in many respects, antagonistic. While secularization, Russification, and strong ethnic nationalism have shaped Caucasian Azerbaijan, strong religious identity, social conservatism, and cultural Persification have been dominant in the midst of Iranian Azerbaijanis. Emphatic cultural dissimilarities between the Northern and Southern Azerbaijanis are something Azerbaijanis on both sides of the Araxes River, even those in favor of unification have become gradually cognizant of.

Since the 1990s, the following processes have been crystallized among Iran’s Azerbaijanis:

In the final analysis, the Azerbaijani question in Iran epitomizes the growing intersection between the affairs of the South Caucasus and those of the Middle East. Those seeking to weaken the Islamic Republic are likely to continue to monitor the matter with interest; and domestic factors will ensure that it does not go away.