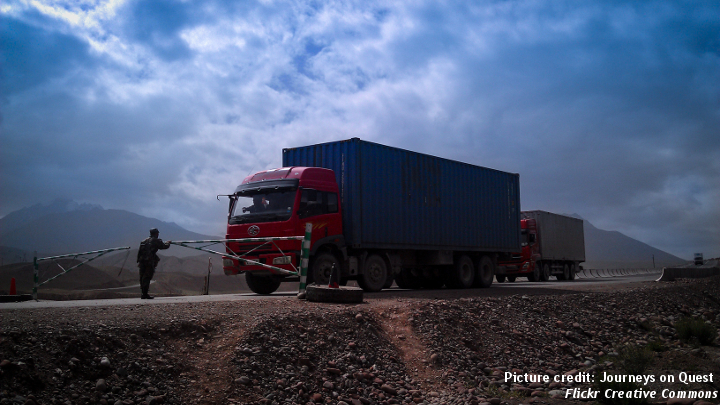 Central Asia constitutes a lynchpin for China’s Belt and Road ambitions. However, as Niklas Swanström and Pär Nyrén argue, Beijing also faces a number of challenges and pitfalls if Greater Central Asia (GCA) is to become a conduit – and not a bottleneck – to its grand initiative.

At the end of August 2016, a car rammed the gates of the Chinese embassy in Bishkek, Kyrgyzstan, detonating a device which killed the driver as well as injuring three Kyrgyz workers. No Chinese were harmed. While the finger has been pointed at Muslim Uighur militants, it is also a fact that anti-Chinese sentiment in Kyrgyzstan has intensified in response to China’s expanding economic presence in the country. Although the attack itself is somewhat of an anomaly, its occurrence nevertheless raises the broader question of the security of China’s assets and investments not only in Kyrgyzstan but in GCA as a whole. This is all the more significant in light of the instability in the region coupled with the weakness of its regimes. Beijing’s predilection towards non-interference in the internal affairs of other states adds to this turbulence as it constrains its ability to provide security. This may be a critical weakness given Beijing’s growing economic interests in GCA, not to mention other policy pitfalls that have generated anti-Chinese sentiment. Unless addressed, these may serve to jeopardize the long-term success of its Belt and Road initiative.

Over the past two decades, the republics of Central Asia, as well as Afghanistan, have assumed a steadily increasing importance in Chinese foreign and economic policymaking. China’s engagement through the Shanghai Cooperation Organization (SCO) and the deepening of its trade and energy ties has seen it arguably eclipse Russia as the pre-eminent foreign actor in the region. Investment in infrastructure development and natural resource extraction has made an especially significant contribution to the development of Central Asian economies. This has included among other projects, the China-Central Asia Pipeline, which has operated two lines since 2009, a third since 2015 and a fourth still in the works at an estimated cost of US$ 800 million and the planned 270-kilometer high-speed China-Kyrgyzstan-Uzbekistan Railway.

The Belt and Road Initiative (previously known as One Belt, One Road) launched by President Xi Jinping in 2013 is set to further deepen China’s relations with GCA. Central Asia occupies a pivotal position within the Silk Road Economic Belt of trade and transportation corridors which will potentially connect China to markets in Europe. Projections of the initiative’s cost range from US$ 1.4 trillion to US$ 8 trillion, 890 billion of which will come from the China Development Bank alone. Provincial governments and private businesses are also expected to provide significant financial contributions. Regardless of precisely what the total figure amounts to, the Belt and Road Initiative is slated to be the single largest investment project in history.

A stable environment is essential for the success of China’s grand strategy. However, Central Asia exhibits many sources of real and potential insecurity. First, at the inter-state level, relations between several of the Central Asian republics are relatively poor with unresolved territorial claims, disputes over water-sharing, and rivalries between leaders. Border skirmishes and closures have been frequent, as witnessed in the multiple deadly clashes that have taken place along the Uzbekistan-Kyrgyzstan border in recent years.

Second and closely related, general instability produced from weak governance, criminalization, and corruption mars the region. While China has its own corruption issues, those of Central Asia are far more severe and deeply undermine the social contract between populations and states. Instability emanating from Afghanistan also constitutes an ever-present factor. Adding to this, these broad issues of corruption generate tensions between sub-regions. The Tajik province of Gorno-Badakhshan –  a key arterial routes from China into Central Asia has witnessed clashes between the government and an armed group. According to unofficial accounts these clashes have resulted in over 200 deaths including 17 security officers. In sum, these seeds of instability make the region a potentially weak link within the initiative. The volatility of the region raises significant questions on how China will manage to keep transportation routes open and secure its infrastructure assets and investments should they come under threat.

Third, Islamic radicalization also has also been presented by the Chinese government as a growing concern. Links have been drawn between homegrown networks and the Islamic State (IS) as well as with terrorist groups in China’s Western province of Xinjiang. Chinese state-media outlets have claimed that 300 Chinese Uighurs have fought alongside IS. Although alternative sources have not been able to corroborate these exact figures, there are at least 114 cases of Chinese nationals amongst ISIS’s ranks.

1) The international commitment to bolster security in GCA and to assist in state-building and strengthening institutions – a source of instability – has been insufficient. The SCO exists as the key multilateral instrument to bolster regional security cooperation. While China plays an important role in the SCO, the comprehensiveness and depth of the organization’s counterterrorism activities, joint military drills and intelligence cooperation are beset by a number of complications. The SCO is impaired by a weak organizational structure, poor relations between members and a considerable Sino-Russian rivalry. Its inefficacy was displayed in 2010 after it failed to  respond to events in southern Kyrgyzstan which left 470 people dead, 300 000 displaced domestically and 111 000 displaced to Uzbekistan.

Aside from regional security mechanisms, Beijing does not have a long-term strategy by which to mitigate potential security challenges that it may face in GCA. In the greater context, focus has been placed on military and strategic interests on its Eastern seaboard. In any case, China remains constrained by a policy of non-interference, one of the “five principles of peaceful coexistence”. This means that maintaining stability by dispatching troops would be out of the question, not to mention that such actions would draw a considerable negative reaction from local and regional actors. In short, the security component of its economic initiatives remains underdeveloped.

2) Another setback is Beijing’s history of primarily engaging only with the central governments of GCA. Although the necessity of engaging with non-state actors has now been realized, a preference towards central governments represents a twofold dilemma. Firstly, being perceived as too closely allied with unpopular authoritarian governments could place its interests in jeopardy. Particularly, if there were to be political change or significant social unrest in the states of the region. Secondly, focusing solely on government-to-government relations is mostly inadequate in a region where governments do not exercise full control over their territories – namely Afghanistan, Tajikistan, and Kyrgyzstan – and where competing power centers exist. Again, Beijing’s principle of non-interference in internal affairs also represents a constraint to the extent to which it will engage with other actors, at least formally. Notwithstanding, reducing the threat to its interests and assets in GCA will necessitate that China pursue a broader-based engagement strategy with a greater diversity of stakeholders.

3) An additional challenge that China faces is the management of its State-owned Enterprises (SEOs) since their misconduct may give rise to anti-Chinese sentiment. Indeed, reports of Chinese companies outcompeting and usurping local businesses have led to accusations of “chauvinism” and that China is seeking to “take over” the region. Questions are also raised when Chinese interests begin buying or renting land for commercial purposes and only employing Chinese labor forces. In the minds of many, the practice of employing their own citizens (often illegally) in foreign stationed companies abates the idea that Chinese businesses greatly benefit local foreign economies.

Anti-Chinese sentiment as a result of such behavior can be exemplified by the popular anti-Chinese protests in Kyrgyzstan, a country whose government has not objected to Chinese economic expansion. Nationwide, Kazakhs took to  the streets in April to voice their fear that land reforms would give Chinese investors excessive influence over land ownership. A related issue concerns the need for large infrastructure projects and extractive industries to exercise greater corporate social responsibility by conducting more stringent socio-economic and environmental impact assessments. Chinese companies and government actors would do well to appease some of that criticism, and there are signs that China is beginning to do so. The number of jobs created as a result of Chinese trade and investments in Kyrgyzstan amount to 800,000, whereas Chinese nationals staying illegally in Kyrgyzstan number an estimated at 90,000 according to the Kyrgyz National News Agency.

4) A fourth challenge for China concerns policy coordination between the central governance structures and the periphery. China’s provinces and cities are increasingly shaping China’s foreign policy to fit their own agendas. The Xinjiang Uyghur Autonomous Region – a provincial-level administrative region in western China – is no exception to this. Xinjiang is economically dependent on the Central Asian states, which in 2015 accounted for 63 percent of the Autonomous Region’s officially declared exports, although the real share is most likely even larger. The majority of the trade is on a barter basis and, accordingly, there has been a tendency for some local institutions to turn a blind eye to the grey and black trade conducted and the negative consequences this entails, including corruption of local authorities and increased tension with the Central Asian states. This is largely based on the short-term financial gain, licit and illicit, that is the priority for the local governments and the long-term geopolitical and geo-economic influence that the central government in Beijing prioritizes. Failure to effectively coordinate policies between the central government in Beijing and the Xinjiang regional government in an effort to consolidate the policies could threaten China’s financial gains and geo-political influence in the region.

China’s increased influence in GCA has been notable, both at a multilateral bilateral level. GCA is the only region where China is the single most important actor. Not only is it able to set the regional agenda but the Asian Infrastructure Investment Bank and the Silk Road Fund both reflect the presence of a much more active, even if not expansive power in the region. Having said this, there are still certain limitations. Indeed, whilst China holds a strong commercial presence in Central Asia, it is still lacking in how it engages with the region as well as its capacity to provide security.

What China needs is a more consolidated policy in GCA. This would necessitate greater engagement with local and national government structures as well as civil society organizations to enable a more effective and responsible investment policy. The only way forward is to engage and strengthen the government structures but also to remain realistic since corruption and criminalization has reached unprecedented levels in GCA. To the same end, the success of the Silk Road Economic Belt largely depends on a stable environment in GCA. China’s foreign policy principle of non-interference will inevitably be tested if its assets and interests are put at risk. In light of this, China would be well served to at least develop a security component or a long-term strategy for the region by which it can alleviate potential security challenges. By addressing these policy concerns China will be well-placed to continue in its role as the key actor in what is ultimately still a very fragile region.

Dr. Niklas Swanström is the Director of ISDP and Pär Nyrén is an intern at the institute.

The opinions expressed in this Policy Brief are those of the author and do not necessarily reflect the views of the Institute for Security and Development Policy or its sponsors.