Engulfed in the Gulf: Erdoğan and the Qatar Crisis 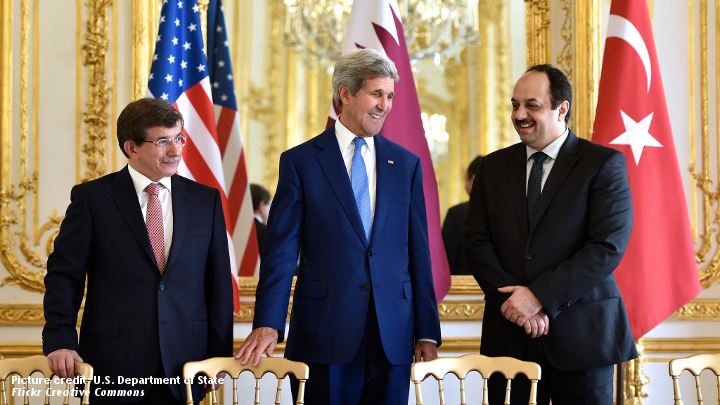 The Gulf crisis over Qatar is once again catapulting Turkey into the politics of the Middle East, for which it is woefully unprepared. After a brief attempt at neutrality, Ankara threw in its lot with Doha, condemning the sanctions imposed by a Saudi-led coalition and accelerated its deployment of troops to a new base in Qatar. This decision risks upsetting President Erdoğan’s tenuous rapprochement with Saudi Arabia, and reflects the continued ideological prism guiding Turkish foreign policy. But it also reflects a concern with regime security. At least in part, Erdoğan’s embrace of Qatar reflects a belief that the same forces that supported the overthrow of Egypt’s Muhammad Morsi welcomed the July 2016 failed coup in Turkey and now seek regime change in Doha. If so, Turkey’s stance is unlikely to change, indicating a standoff may in the making.

BACKGROUND: : On June 25, speaking at the conclusion of Ramadan, Turkish President Recep Tayyip Erdoğan reacted in the strongest terms yet to the measures taken by Saudi Arabia, the United Arab Emirates, Bahrain and Egypt against Qatar. What appears to have triggered Erdoğan the most was the inclusion in a list of demands on Qatar that it desist from hosting a Turkish military base. Erdoğan decried the demands as “disrespectful” and “unlawful”, and the reference to the Turkish military presence as “interference in bilateral relations”.

It appears, thus, as Turkey is once again engulfed in a Middle Eastern dispute that its leadership may not fully understand. Following the 2011 Arab Upheavals, Turkey’s bid for a regional leadership role in the Middle East, its involvement in the Syrian civil war, and it support for the Muslim Brotherhood led to the rapid deterioration of relations with key regional players. Aside from a rupture of ties with Israel and Syria, this included an estrangement with Iran and Iraq, a rupture of relations with Egypt after the 2013 military intervention there, and a deterioration of ties with Saudi Arabia and the UAE, who supported the overthrow of the Muslim Brotherhood government in Cairo. Yet following the succession of King Salman to the throne, Ankara and Riyadh mended their relations somewhat, if only to counter the shared Iranian threat. (See April 8, 2015 Turkey Analyst). In the past two years, Ankara has tried to work toward unity among Sunni powers on regional matters, and to develop Turkey’s position as a defense exporter to Gulf monarchies. But already in 2014, Turkey announced its intention to build a military base in Qatar. The logic of this deployment, which is to hold up to 5,000 troops, remains nebulous behind the symbolic significance of a Turkish base so far from home. The bilateral agreement calls for a joint base led by a Qatari Major General and a Turkish Brigadier General, and was presented as a step to counter the Iranian threat in the region, which Turkish sources claimed the U.S. Al Udeid base in Qatar, which hosts 11,000 troops, was insufficient to handle. Yet this justification was barely credible. First, Qatar has consistently sought cordial relations with Tehran, as the two countries share the giant South Pars gas field, and this is one of the main reasons for Riyadh’s antagonism toward Doha. Second, it is hard to imagine a scenario in which Turkish troops deter an Iranian military threat while the much-larger U.S. base does not.

A closer look at the Turkish-Qatari deal is indicative. Indeed, the deal provides for Turkish training of Qatari Gendarmerie, as well as provision of “training in internal security, in combating smuggling and organized crime, and to control mass public protests.” In other words, a key goal of the Turkish deployment appears to be to support the regime security of the al-Thani family. In this context, it is relevant indeed that the Qatari Emir, whom Erdoğan refers to as his “brother,” reportedly sent an elite squadron of Special Forces to Ankara to protect Erdoğan in the immediate aftermath of the July 15 attempted military coup, undoubtedly providing comfort at a time when Erdoğan was not sure whom he could trust.

Indeed, the Turkish-Qatari relationship is as much about personal ties as it is about national interests. The affinity for Qatar among Turkish Islamists is not new: it was Qatari financing that allowed Erdoğan to effectively seize opposition media in the late 2000s. (See January 18, 2010 Turkey Analyst) Turkish observers say these ties between leading Turkish Islamists and Qatari, including financial support, likely go back further to before the AKP’s creation. Against this background, it should not come as a surprise that when forced to take a side, Erdoğan would side with Qatar.

IMPLICATIONS:  Erdoğan’s ties with Al-Thani’s Emirate is not just about personal chemistry. The two leaders, and their regimes, have been aligned on all major questions in regional affairs in the recent past. On Iran, both are wary of Tehran’s regional bid for domination, but have sought to build ties with Iran on the basis of joint economic and other interests – diverging from Saudi Arabia’s policy of overt confrontation. When the Arab upheavals happened in 2011, both enthusiastically supported them, and worked to support the Muslim Brotherhood’ bid for influence through financial, media and political support. When that did not work in Syria, both moved to supporting more radical groups, including the Al Qaeda-aligned Nusra front, while taking an ambivalent approach to the spread of the Islamic State. In Egypt, both strongly endorsed Morsi’s presidency and the Muslim Brotherhood’s unconstitutional efforts to consolidate power.

Thus, Turkey and Qatar formed a third block in regional politics, between the Iranian-led Shi’a block and the Saudi-led traditionalist forces that sought to maintain the status quo. Ankara and Doha embraced a revolutionary zeal that put them on a collision course with the Gulf monarchies, led by Riyadh and Abu Dhabi, who saw the Muslim Brotherhood as a lethal threat to regional stability and potentially to their own regime security. Where Saudi and Emiratis sought to put the brakes on the Islamist revolutionary sentiments in the region, Turks and Qataris aimed to ride these passions to mold a new Middle East.

This is not to deny the Saudi role in sponsoring radical Islamism – indeed, the monarchy began exporting extremism as a counterweight first to Nasserism in the 1960s and then to the Soviet Union in the 1980s, with at least tacit American approval. But the Saudis appear to have begun to appreciate, as Zalmay Khalilzad put it, that they “had created a monster that had begun to devour them.” The rise of Mohammad Bin Sultan, the newly appointed hawkish and reformist Crown Prince, is a clear indication that Saudi Arabia’s approach to radical Islamism is changing.

Not so in Doha or Ankara. The main significance of Erdoğan’s stance in the Qatar crisis is that it belies the notion that Turkey’s leaders have learnt anything from the failure of their Middle East policy in recent years. In 2016, the efforts to bury the hatchet with Russia and Israel followed on Erdoğan’s mending of fences with Riyadh, and led to speculations that the adventurist foreign policy of past years was really the work of Ahmet Davutoglu, and that with his ouster, Turkey would return to a more pragmatic stance under a foreign policy set directly by Erdoğan.

But that approach ignored the fact that while Davutoglu was the ideologue and engineer of Turkish foreign policy, Erdoğan was its architect. Davutoglu was merely implementing a vision for Turkey’s role in the world that was very much Erdoğan’s own. And that vision appears to continue undeterred by recent setbacks – in great part because it is grounded not in practical calculations but in ideological conviction. While Erdoğan’s moves in 2015-16 reflected a pragmatic willingness to take a step back to regroup, it did not change the country’s new foreign policy vision.

CONCLUSIONS: Unless the crisis is rapidly resolved, Erdoğan’s decision to side decisively with Qatar may have serious repercussions for Turkey’s relations with Saudi Arabia. There have been suggestions that Turkey will be made to pay a price for its policy. Indeed, in a situation where Qatar is regionally isolated, Turkish support is the main lifeline that provides Doha with the ability to withstand the furious pressure imposed by the Saudi-led coalition. Should the standoff continue and Doha fail to fall in line, Turkey may be made the culprit.

Representatives of the Gulf monarchies have already made it clear they do not want to see a Turkish base in Qatar, which would provide Doha with the ability to continue to follow an independent foreign policy at odds with their neighbors’ priorities. Turkish leaders have made it equally clear that they have no plans to reverse their deployment. This makes it abundantly clear that Turkey’s growing military presence in the Gulf will be a source not of stability, but of controversy and contention in years to come.

These developments are not isolated from the growing acrimony in Turkish-American relations. While the State Department has sought to defuse the crisis, few in Ankara or elsewhere believe it is a coincidence the Saudis launched their initiative soon after President Trump’s visit to Riyadh. Along with his rhetoric on Qatar, Erdoğan has also sharpened his tone in condemning U.S. arms deliveries to Syrian Kurds, and Washington’s refusal to extradite preacher Fethullah Gülen, on whom Erdoğan blames the July 2016 coup. Meanwhile, the U.S. House of representatives unanimously condemned the brutal beating of peaceful protesters by Erdoğan’s security detail in Washington in May, and U.S. prosecutors have launched criminal proceedings against Erdoğan’s bodyguards.

Trump’s priorities run directly against Erdoğan’s vision of the Middle East. From Ankara’s perspective, the new U.S. Administration’s harsher take on Iran may be welcome; but its plans to designate elements of the Muslim Brotherhood as terrorists, and its apparent embrace of status quo powers in the Middle East such as Egypt, Saudi Arabia and Emirates certainly is not. The Qatar crisis may be an indication of further deterioration not only of regional relations, but of U.S.-Turkish relations as well.