Living on Different Planets: Washington, Ankara and the Zarrab Case 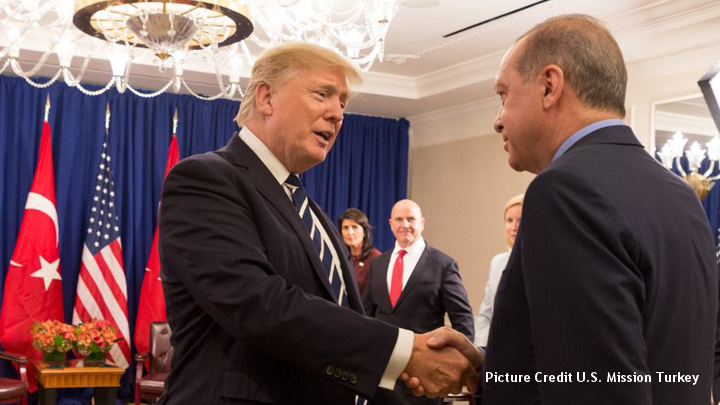 Reza Zarrab’s testimony in early December to a New York court was hardly helpful in breaking the impasse in Turkish-American relations. By implicating Turkish President Recep Tayyip Erdogan directly in the oil-for-gold trade that is the subject of the trial, Zarrab may have contributed to a new low in the fraught alliance. However, the case is symptomatic of the fact that Turks and Americans lack basic trust. It also illustrates that they are now on completely different frequencies. The Zarrab case means entirely different things to Turks and Americans, and this disconnect risks contributing to a break that neither party may actually want.

BACKGROUND: The US-Turkish alliance is nearly seventy years old, and has seen its share of drama. In 1964, President Lyndon Johnson threatened to cut military aid to Turkey when the Turkish government was about to intervene in Cyprus to stop atrocities against the Turkish Cypriots and in 1975 the United States imposed an arms embargo on Turkey after it had invaded Cyprus in 1974. In 2003, the U.S. and Turkey publicly clashed over the invasion of Iraq, and Turkey’s refusal to join the effort strongly affected the political and military-to-military relationship between the two countries. Against this background, one could conclude that we have seen this before, that the current low is temporary and likely to pass. Indeed, both countries need each other, and thus, they will somehow find a way to cooperate.

Yet the current state of the relationship suggests a deeper and more fundamental disconnect. Unlike in either of the previous episodes of trouble, Ankara and Washington not only disagree, but interpret reality in diametrically different ways. The Reza Zarrab case is symptomatic of this situation.

From an American perspective, the case is about sanctions-busting and corruption. High-level officials in Turkey approved of a scheme to circumvent U.S. sanctions on Iran, and the independent U.S. judicial system is prosecuting the case. This is not to say Americans are oblivious to the political implications of the case. If the case exposes corruption among some Turkish cabinet officials, that may send a signal to others in the region and globally of the consequences of evading U.S. sanctions. In any case, following Erdoğan’s harshly anti-American rhetoric and his security detail’s assault on civilian protesters in Washington D.C., few in the U.S. capital are willing to go out of their way to help Erdoğan escape this embarrassment.

The Turkish perspective on the case is fundamentally different. Turks – and by no means only supporters of President Erdoğan – will recall how the case first came to light. It emerged through pre-dawn raids in December 2013, as prosecutors loyal to the U.S.-based cleric Fethullah Gülen arrested loyalists of President Erdoğan. (See December 18, 2013 Turkey Analyst) The scandal was instrumental in bringing down four ministers, who were forced to resign as a result of the exposure – primarily in Gülen-affiliated media outlets – of the corruption schemes they appear to have participated in. A second arrest wave that would have involved members of the Erdoğan family was only narrowly suppressed.(See January 15, 2014 Turkey Analyst) In parallel, stories were leaked of relations between Erdoğan’s family members and Yasin Al-Qadi, a Saudi financier accused of ties to terrorism.(See March 12, 2014 Turkey Analyst) In other words, the scandals that exploded in December 2013 were no random corruption cases: they were selected deliberately because they were the most damaging to Erdoğan in the United States, and affected his international standing.

Thus, from the Turkish perspective, the Zarrab episode cannot be understood in isolation from the Gülen movement’s challenge to Erdoğan’s power. To many in Turkey, what happened in December 2013 was a  “judicial coup.” Whether the allegations were well-founded was another matter; but many were appalled by the manner in which pro-Gülen prosecutors and high state officials had accumulated damaging materials on Erdoğan and his close circles, including tapping his cellular phone for months if not years for the specific purpose of obtaining compromising evidence. This was one major reason why the revelations failed to bring down Erdoğan: most Turks appeared more fearful of the scheming and manipulations of a faceless and opaque network within the state than they were of Erdoğan.  As a result, Erdoğan’s party scored a resounding victory in the March 2014 local elections. (See April 9, 2014 Turkey Analyst) Subsequently, he was elected president and succeeded in gradually pursuing the arduous process of purging Gülen supporters – real or suspected – from state institutions. (See May 6, 2015 Turkey Analyst)

Matters are made worse by the fact that this ”judicial coup” was succeeded by a real military coup in July 2016, one whose traumatic impact on Turkish society does not appear to be fully understood in the West. Even among secular Turks who disapprove strongly of Erdoğan’s personality and policies, it is common to find grudging support for the president as the only person who is strong enough to remove the vestiges of the Gülenists from state institutions.

IMPLICATIONS: The nature of Erdoğan’s regime had begun to change long before the July 2016 attempted coup. The direct confrontation within the Islamist camp – between followers of Gülen and Erdoğan – led the latter to scramble for new allies within state institutions to shore up his power, and enable the ouster of Gülen supporters. In practice, this forced Erdoğan into an unholy alliance with the predominantly anti-Western secular nationalists that had a strong foothold across the state bureaucracy, including the military. Indeed, this group had borne the brunt of the purges led by Gülenist prosecutors in 2008-12, and were now released and rehabilitated. (See November 19, 2014 Turkey Analyst)  This process accelerated following the June 2015 election, in which the AKP lost its parliamentary majority. President Erdoğan responded by moving to the nationalist right, abandoning the peace process with the Kurds, and adopting the military’s long-desired hard line in the country’s southeast – which led to the leveling of a number of predominantly Kurdish cities. In effect, an Islamist-nationalist ruling coalition had been formed; and this enabled Erdoğan to recapture control with the November 2015 early elections. The massive purges following the July 2016 coup further cemented this new regime, as they led to the growing prominence – especially in the state security apparatus – of ultra-nationalist forces symbolized by Doğu Perinçek and his Vatan (Nation) Party.

The significance of this shift for Turkish-American relations is widely underestimated. In essence, counter-intuitively, a pro-American Islamist network was purged, and replaced with a heavily anti-American nationalist one.  The ultra-nationalists – known in Turkish by the term ulusalcı, often translated as neo-nationalists – are animated by a deep suspicion of the United States. As they see it, the U.S. actively works to undermine Turkey’s sovereignty and territorial integrity. They saw American support for Erdoğan’s “moderate Islamism” in the 2000s as an effort to undermine the Turkish republic; they see American support for Kurdish forces in Iraq and subsequently in Syria as a plot to create a Kurdish vassal state to the United States, including on Turkish soil. But most of all, these nationalists saw the Gülen movement squarely as an American “CIA operation,” a “project” to take control of Turkey and exert influence in the Muslim world. While these views may appear wild to a Western observer, to many Turks they make perfect sense.

Why else would a Muslim cleric be resident in the United States? Why else would so many American figures, including former CIA officials, endorse Gülen? Why else would the Gülen movement spread exponentially around the globe and be present in over a hundred countries? And why, by the way, would the U.S. be supporting the Kurdish YPG in Syria, even though everyone agrees it is a subsidiary of the PKK, an organization the U.S. itself considers a terrorist organization? Over time, these suspicions morphed into certainty.

The split between Erdoğan and Gülen allowed for a rapprochement between Erdoğan and the ultra-nationalists, because following the 2013 Gezi Park protests, Erdoğan himself apparently came to believe that the United States had turned the “Gülenist weapon” against him. He concluded the United States was out to get him, and that the Gülen movement was America’s main instrument. Ideologically, the AKP discarded its openness to the West, and as Toni Alaranta has written in this journal, embraced an “uncompromising anti-Westernism” that brings together several constituencies: the nationalist-leftist networks of the Perinçek type; the far-right nationalism of the Nationalist Action Party (MHP); and the old-school Islamism of Erdoğan’s own Milli Görüş roots.(See December 1, 2016 Turkey Analyst)

Only against this background do the full implications of the July 2016 coup become apparent. Erdoğan and the ultra-nationalists both concluded this was an American-sponsored coup, and the Obama administration’s apparent indifference to the coup did not help matters. Many in the West were more appalled by Erdoğan’s reaction to the coup – the purges that followed – than the bloody coup itself, in which several hundred were killed and the parliament was bombed by the coup makers. In a snowballing effect, this strengthened Erdoğan’s conviction that the coup had been orchestrated and/or supported by his Western allies.

From the Turkish point of view, the Zarrab case is nothing but the continuation of the U.S.-sponsored “coups” against the country’s leadership by other means. Any shadow of a doubt would have been removed by U.S. prosecutors’ success in turning Zarrab into a state witness, a move seen squarely as turning an erstwhile Erdoğan ally against him.

CONCLUSIONS: Should the U.S. Administration drop its charges against Turkish officials, hand over Fethullah Gülen, cease to arm the Syrian Kurds, and seek to make nice with Erdoğan? That is not what this article argues. However, American officials must be cognizant of this worldview in order to frame a coherent and long-term strategy toward Turkey. Erdoğan may never truly have been a natural ally of the U.S.; he may never be that in the future. But at the same time, he may not be interested in a total break with Washington – while his ultra-nationalist allies in Ankara appear to work exactly toward that goal.

Most Turks appear to agree with the notion that the United States is actively subverting the government of their country. Of course, Erdoğan’s domination of Turkish media helps perpetuate this perception. But in politics, perception tends to turn into reality. For the United States, it is now necessary to calmly revisit its Turkey policy, and craft a strategy that begins with fully recognizing the significant changes that have taken place in the Turkish ruling coalition. It must then take the long view, and focus not on individuals, or even merely on what Washington wants from Ankara tomorrow – but on how a basis for a long-term relationship with Turkey’s state and society can be rebuilt. This will include revisiting areas as disparate as America’s attitude to the Kurdish issue, the Gülen movement, Turkish democracy, and Turkey’s relationship with Europe.

Svante E. Cornell is Editor-in-Chief and Halil Karaveli Editor of the Turkey Analyst. They are Director and Senior Fellow, Respectively, with the Central Asia-Caucasus Institute & Silk Road Studies Program, who form a Joint Center affiliated with, respectively, the American Foreign Policy Council and the Institute for Security and Development Policy.