Myths and Mysteries: Six months on from Turkey’s Curious Coup 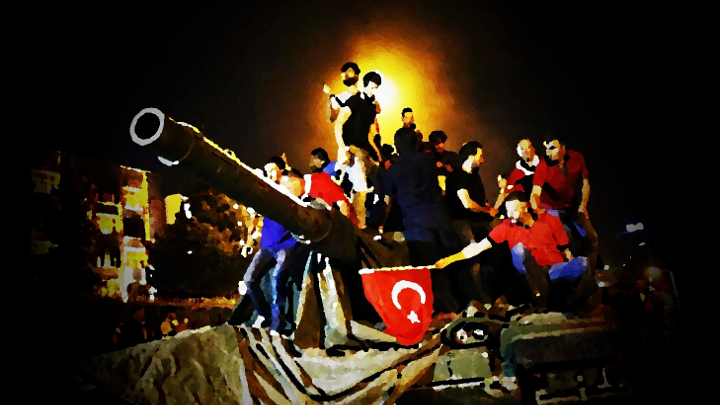 Six months after the failed coup of July 15, 2016, many questions still remain unanswered. Disturbingly, most can no longer be asked. Amid the purges, imprisonments and oppression, Turkey has become a country that is devouring itself.

On January 21, 2017, the Turkish Ministry of Foreign Affairs (MFA) issued a statement describing as “erroneous, unfounded, biased and ignorant” a leaked report by INTCEN, the EU’s intelligence-sharing unit, questioning the Turkish government’s claims that the failed coup attempt of July 15, 2016, was masterminded by the exiled Islamic preacher Fethullah Gülen. In fact, the INTCEN report said that some of Gülen’s followers probably participated in the coup, adding that it was unlikely that Gülen himself had masterminded it.

The MFA would have been justified in asking how INTCEN could be so certain, particularly as the report does not cite any concrete evidence. But the same question could also be directed at the Turkish authorities. As soon as the news of the attempted putsch broke – long before the identities of the participating officers had become clear – President Recep Tayyip Erdoğan and the members of the ruling Justice and Development Party (AKP) immediately blamed the Gülen Movement. It was an assumption, not a deduction.

There is no doubt that members of the Gülen Movement have been responsible for a catalogue of crimes in Turkey, particularly in the period 2007-2013, when the movement was allied with the AKP. Gülenists in the police and judiciary launched a barrage of prosecutions, most notoriously the Ergenekon and Sledgehammer investigations, in which hundreds of people were imprisoned on patently fabricated charges. Others were subjected to blackmail and intimidation. Lives were also lost, whether as the result of being denied proper medical treatment in prison or being driven to suicide in despair at Gülenist defamation campaigns.

The extent of Gülen’s personal involvement remains unclear. His followers insist that he merely provides strategic direction, rather than micromanaging all of the movement’s activities. But, by 2009, the allegations of abuses committed by his followers had received considerable publicity. Gülen will have been aware of them. Such is the cultish devotion with which he is regarded by his followers that a statement by him could have immediately halted any abuses. Gülen chose to remain silent.

The Gülen Movement’s past record is not, in itself, proof that it was responsible for the attempted coup. Yet, over the last six months, Turkish officials have locked themselves into an unquestionable narrative. The putsch and the reaction to it have been airbrushed into a myth – a fusion of people and leader, in which Erdoğan is portrayed as the embodiment of the national will, heroically defending the country against an Orwellian ‘forever enemy’ in the form of the Gülen Movement and the scheming West that is allegedly controlling it.

However, not only are there problems with the claim that the coup was a purely Gülenist affair, but the Turkish authorities have yet to produce convincing evidence to support their narrative. Much still remains unclear. Perhaps even more disturbing than the absence of answers is that questions are not even being asked.

IMPLICATIONS: The government’s claim that the coup was masterminded by Gülen rests almost entirely on a statement made by Chief of Staff General Hulusi Akar. On the evening of July 15, 2016, Akar was taken hostage in military headquarters by a group of putschists allegedly led by Air Force Brigadier General Hakan Evrim. In a statement he later gave to the public prosecutor, Akar claimed that, in an attempt to persuade him to support the putsch, Evrim had said: “I can put you in contact with our opinion leader Fethullah Gülen.”

This was later denied by Evrim himself. In a statement to prosecutors, Evrim quoted Akar as acknowledging that there was considerable discontent in the country, but insisting that a coup was not the answer. Evrim said that Akar had suggested talking with the leaders of the different segments in Turkish society in the hope of reaching a consensus that would defuse the tensions. Evrim denied ever offering to put Akar in contact with Gülen, maintaining that he had said: “If there are any political parties, opposition figures, NGOs or opinion leaders that you would like to talk to, I can call them.”

This is not to say Akar was lying. He may have simply misheard or misunderstood. It is also possible that Evrim is being untruthful, although his explanation appears more logical than Akar’s. Not only do Gülen’s followers never refer to him as “our opinion leader” – they usually prefer “hocaefendi” – but it is unclear what difference offering to put Akar in contact with him could have been expected to make. The only context in which it would have made any sense would have been if Akar himself had been a Gülen sympathizer and needed convincing that the putsch had Gülen’s approval. But there is no evidence that Akar is a Gülenist.

Without Akar’s claim, there is no evidence to suggest that Gülen himself was even aware of the coup. In the weeks following the putsch, officers accused of participating were routinely denied access to lawyers and frequently physically abused. During this time, a handful of statements were leaked to the Turkish media in which alleged participants apparently confessed to being Gülenists. Several of these statements have since been disowned by those who were reported to have made them. Even if the remainders are taken at face value, no one has yet confessed to participating in the organization of the putsch, merely to joining it when it was already underway. Not only is the number of these alleged confessed Gülenists very small but, in terms of the alleged statements leaked to the media, they are considerably outnumbered by those who have denied – often vehemently – ever having any connection with the Gülen Movement.

Remarkably, despite months of vigorous interrogation, no convincing evidence has yet been made public about how the coup was planned or coordinated. There can be no doubt that, if such evidence had emerged, the Turkish authorities would have ensured it was in the public domain.

The only “evidence” that has emerged so far about the planning of the putsch comes from an anonymous “secret witness”, codenamed “Şapka” or “Hat”. “Şapka” is reportedly a former officer who was detained in Izmir on August 8, 2016, a week after he had been dismissed from the military for suspected Gülenist sympathies. His statement to the public prosecutor appears to date from October or November 2016, although the full text was not leaked to the media until December 2016. “Şapka” claims that he received a text message on July 5, 2016, summoning him from Izmir to a villa in Ankara. “Şapka” says that he then spent three days in the villa, where he participated in the preparation of plans for a coup by around ten high-ranking officers under the leadership of Adil Öksüz, a civilian who was briefly detained after being found in the company of alleged putschist officers on July 16, 2016 and has since disappeared.

Şapka’s testimony is suspiciously sparse in content. For example, the military officers he cites as being present in the villa had all already been named as alleged putschists by the pro-government media. He quotes Öksüz as saying that the coup would prioritize freeing imprisoned Gülenists and that he would shortly be flying to the United States. Information had already been published in the media showing that Öksüz flew to the U.S on July 11, 2016. But “Şapka” does not quote Öksüz as saying anything else. For example, there is nothing in “Şapka”’s testimony about what the putschists expected to happen if the coup had been successful. They must have had some plan or expectation – and it is inconceivable that it would not have been mentioned during the three days he claims he was in the villa. But he says nothing about it in his statement.

Regardless of Şapka’s reliability, the question of what the putschists thought would happen if the coup was successful is important. Did they plan to govern by themselves? If not, who did they think would take power after Erdoğan had been overthrown? If they were Gülenists, did they plan to bring Gülen himself back from the United States? If so, what impact would admitting responsibility for a coup have on the worldwide operations of a movement that has ostensibly espoused non-violence? All that is known is that, on the night of the coup, the putschists presented themselves as hard-line Kemalists. This may have been a false flag by Gülenists. But it still needs to be explained.

None of this means that, as some of his detractors have alleged, Erdoğan either plotted the putsch or learned of about it and allowed it to proceed in the hope that he could exploit to tighten his grip on power. In fact, Erdoğan and the AKP leadership seem to have been as much taken by surprise as the rest of the country. When Erdoğan first appeared on national television to call his supporters onto the streets to confront the putschists, he looked genuinely anxious. Rather than pre-planned, the government’s response was as shambolic as the coup itself. Indeed, one of the most alarming consequences of the putsch was how quickly the center of the state collapsed. In terms of coordination and decision-making, the main momentum for the response to the coup came not from the government or state institutions but from the news coverage on the television.

Six months after Turkey’s failed coup, questions about what actually happened have been submerged by a bludgeoning myth. The government’s central thesis – that the putsch was instigated by Gülenists – may be true. But it has yet to be proved.

No one in Turkey is asking whether Erdoğan needed to call his supporters onto the streets instead of waiting for the loyal majority of the security forces to restore order – a process that may have been slower but would have resulted in considerably less civilian casualties. Nor is anyone asking why, if his supporters were defending democracy, they chanted only religious slogans, also attacked Alevis and Syrian refugees and, over the last six months, have remained silent while his opponents been persecuted and denied even the most basic of human rights. Nor is anyone calling for justice for the young conscripts and cadets, who were tricked by putschist officers into thinking they were participating in an exercise, and were then lynched by Erdoğan’s supporters. Most worryingly, nor is anyone asking what the resultant sense of empowerment amongst his hardcore supporters means for the rule of law.

Perhaps the most pernicious aspect of the official narrative – and one that is believed even by a large proportion of Erdoğan’s opponents – is that the coup was masterminded by the West. Not only is it untrue but it has ensured that Turkish society has become permeated with fear: whether of Erdoğan, ever-elusive foreign conspiracies or both. One thing that be said with certainty about the failed putsch is that it was instigated by Turks. And now – amid the purges, imprisonments and oppression – the country is devouring itself.