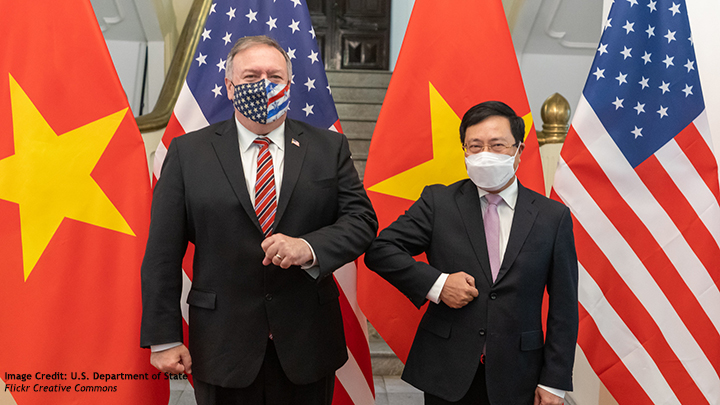 U.S. Secretary of State Mike Pompeo left Vietnam after what appears to be a last-minute decision to visit the country during his most recent diplomatic shuttle tour in Asia.

The side-jaunt was a surprise, as Vietnam was not included in Pompeo’s initial travel plan, which included India, Sri Lanka, Maldives and Indonesia. It was later arranged at the invitation of Vietnam’s Foreign Minister Pham Binh Minh. Considering the uncertain impacts of Pompeo’s visit in light of the presidential election in the United States, it would be interesting to know what impression Vietnam wanted to convey to domestic and international audiences by facilitating this tango. There are several impressions it may want to avoid.

First, avoid connecting the visit with the issue of human rights in Vietnam.

It was reported that Pompeo’s visit came after a U.S. citizen of Vietnamese descent, Michael Nguyen, was released by Vietnam and allowed return home to California. Nguyen was sentenced in June 2019 to 12 years in a Vietnamese jail for “attempting to overthrow the state.” His release had been requested by several top U.S. officials on humanitarian grounds.

But any linkage to Pompeo’s visit was denied by the United States. Both the Vietnamese and U.S. governments officially announced that Pompeo’s purpose was to “celebrate the 25th anniversary of the diplomatic normalization between the two countries in 1995.”

Domestically, Vietnam would want to distance Pompeo’s visit from Nguyen’s release. According to a Vietnamese state media report, Nguyen, who was born in Vietnam in 1964 but lived in the United States since childhood, was detained in July 2018 on suspicion of anti-government activities. Vietnam has openly criticized U.S. interference into its domestic affairs on the basis of human rights. This would be the last thing the Vietnamese government would want to display domestically — that it would sacrifice national security over a U.S. claim of abuse.

The U.S. seems to be catering to this concern. A news release from the U.S. Department of State avoided making a sensitive connection by focusing on “mutual understanding” of human rights and stating that U.S. President Donald Trump and Vietnam’s President Nguyen Phu Trong had affirmed their commitment to the protection and promotion of human rights in two joint statements.

Second, avoid connecting the visit with any sort of alliance with the U.S. in the concept of a free and open Indo-Pacific.

Pompeo’s Asia tour followed a trip to Japan, where the foreign ministers of the Quad — Australia, India, Japan and the U.S. — met in early October. The geographic attention of the most recent trip was on South Asia, and three countries there were included in Pompeo’s shuttle diplomacy — a clear signal from the Trump administration of its commitment to consolidating U.S. relations with countries located in the Indian Ocean and with ASEAN countries as represented by Indonesia, and Vietnam, the rotating chair of ASEAN for 2020. One of the key themes Pompeo was promoting is the FOIP, whose goal is the geostrategic strangulation of China.

But ASEAN announced its Outlook on the Indo-Pacific in June last year, presenting ASEAN’s vision. The Outlook is different from the FOIP. While the FOIP represents an excessively military orientation, the Outlook is more consistent with ASEAN’s principles of inclusiveness (including China) and consensus-building, with emphasis on a normative, political and diplomatic approach.

The Outlook also shows ASEAN’s intention to preserve the group’s centrality in the development of an Indo-Pacific architecture and counter any linkage of the Indo-Pacific to a balance of power approach. Without targeting any country, the Outlook presents ASEAN’s main roles in regional security as norm-setting and confidence-building, rather than in exercising hard power or wading into conflict resolution.

As this year’s ASEAN chair, Vietnam’s main objectives are to strengthen the unity of the group and to uphold the key principles of consensus and centrality. Any perceived deviation from the Outlook could damage Vietnam’s credibility within ASEAN and pose a threat to ASEAN centrality.

Meanwhile any perceived alliance with the U.S. would run counter to Vietnam’s official foreign and defense policies. To end the diplomatic isolation resulting from its military intervention in Cambodia in late 1978, Vietnam outlined its “multi-directional foreign policy” in 1988 and formally adopted it in mid-1991at the Seventh National Congress of the Communist Party of Vietnam.

Since then Vietnam has established 17 strategic partners and 11 comprehensive partners. All the major players in global affairs are included. To be allied with the U.S. FOIP scheme to isolate China would deviate from Vietnam’s “Friend to all and foe to none” foreign policy. Furthermore, Vietnam’s 2019 defense white paper clearly states that the country would embrace a policy of “no military alliance,” “not siding with one country against the other,” “no permission to set up military bases or use its territory to carry out military activities against other countries” and “no use or threat of force in international relations.”

Third, avoid miscalculating the impact of Pompeo’s visit on the U.S. involvement in the South China Sea.

Pompeo has clarified the U.S. position on the South China Sea, but other issues also affect developments, such as how the U.S. position will be implemented, how other claimant states and ASEAN will respond and what the nature of the China-Vietnam relationship will be.

The U.S. news release regarding Pompeo’s visit to Vietnam clarified the U.S. position regarding the China-Vietnam maritime dispute over oil and gas exploration and exploitation of the Vanguard Bank. First, the U.S. denied China’s maritime claims to waters surrounding the Vanguard Bank and categorized its actions as a “campaign of bullying.” Second, the U.S. announced that it was prepared to take firm actions to oppose any Chinese move it considers illegal. But it’s hard to know what “firm actions” against China would look like when China is increasing its diplomatic efforts to work with ASEAN countries and step up the process of concluding a Code of Conduct. How will the ASEAN claimants respond to the U.S.? Each has its own calculations and priorities.

In the face of increasing tensions between China and the U.S., the foreign ministers of ASEAN member states made an eight-point statement in August reiterating their commitment to maintaining Southeast Asia as a region of peace, security, neutrality and stability. Further, they reiterated their support for multilateralism founded on the principles of the UN Charter and a multilateral approach in addressing emerging challenges at both the regional and global level.

Although Vietnam is one of the key rivals of China in the South China Sea, it has been distancing itself from the perception that it is allied with the U.S. against China. In response to hard US rhetoric, Vietnam’s Foreign Ministry reiterated the country’s maritime claims and its position of welcoming “any views on the South China Sea that are in accordance with international law.”

Vietnam and China are comprehensive strategic cooperative partners, and China is the sole country with such a relationship. Both countries officially agree that the South China Sea is only a part of that. The bilateral relationship has been well-managed even with their maritime challenges. Vietnam may expect Pompeo to offer continued support in building up its maritime security capabilities. Meanwhile, it carefully manages its stance in the context of the triangle it forms with the U.S. and China. In practically any big power rivalry, it is dangerous for smaller countries to choose sides.

After Pompeo’s trip to Hanoi, the Chinese embassy in Vietnam released a statement calling on countries in the region not to be manipulated by external intervention, but rather to work together against the pandemic, as well as for regional peace, stability and development, by promoting multilateralism and free trade.

Pompeo’s visit to Hanoi will surely affect Vietnam’s relations with the U.S., but for how long and in what way depends on how Vietnam calculates its own national interests.