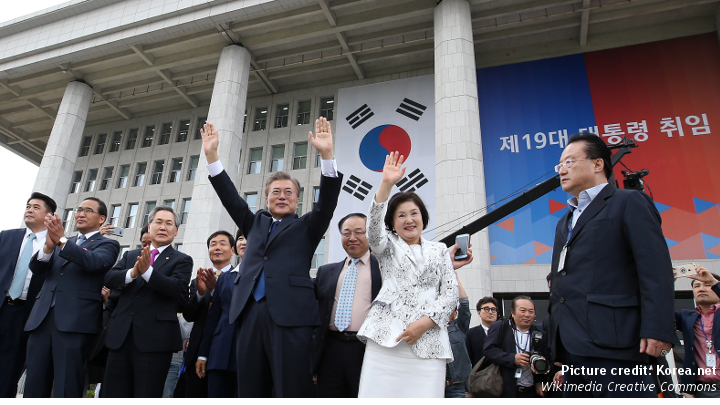 South Korea’s constitution vests too much power in the office of the president, which raises the risk of the post being misused. This was brought dramatically into focus earlier this year when millions of South Korean citizens took to the streets to protest against the revelations of misconduct concerning former President Park Geun-hye. Reform of the constitution is now a pressing issue to bring much needed accountability and transparency to South Korea’s often called imperial presidency.

The National Assembly of the Republic of Korea is preparing to amend the constitution, including enhancing human rights provisions and granting greater local autonomy. The biggest issue, however, is changing the current governmental system in order to establish greater checks and balances on the presidency. While such amendment has long been proposed, the impeachment and subsequent conviction of former President Park Geun-hye in March 2017 on charges of abusing her position – which saw millions come out on to the streets in protest in Seoul – has given renewed momentum to do so.

President Moon Jae-in who won the presidential elections in May agreed to amend the constitution, pledging that a referendum would be held together with provincial elections in June 2018. This represents an historic opportunity to fix democratic deficits in the South Korean political system with an executive wielding too much authority, whilst at the same time helping to redress low political trust among the population. However, a lack of consensus on how to best curb presidential power, together with the rushed timetable, could prove impediments to reform.

The current constitution finds its antecedents when the Korean Constitutional Assembly drafted a new constitution for South Korea in 1948. While its draftees tried to adopt a parliamentary system, South Korea’s first president, Syngman Rhee, argued that a strong leader, and thus a centralization and concentration of power, was needed in building a new nation, as well as to confront the threat posed by North Korea. Following the April 19 Revolution which led to Rhee’s resignation in 1960, the new government formed a parliamentary system according to the constitution but this was thwarted within a year by Park Chung Hee’s military coup. Successive authoritarian quasi-military governments ruled South Korea until 1987, when mass protests known as the June Struggle heralded a new democratic opening for the country. By popular demand, the constitution was amended to stipulate the holding of direct presidential elections. Roh Tae Woo subsequently became the first South Korean leader to win a contested election in December that year.

But while South Korea has experienced significant democratic development in the past three decades, the constitution has remained unchanged since 1987. The problem, critics charge, is that the constitution does not grant a provision for an adequate division of power, with a lack of proper mechanisms to check and balance a strong executive. Deficits include the tendency of the president to control the National Assembly through the authoritarian party system; the lack of a fully impartial judiciary with its appointees nominated by the president; the inefficacy of congressional investigative powers as well as that of the prosecutor; and the lack of a properly functioning Board of Audit and Inspection (while supposedly independent and tasked with scrutinizing government acts, the body remains under the president).

Others argue that the text of the constitution leaves room for interpretation, allowing presidential power to be restrained and a balance maintained between constitutional institutions. For example, as former President Roh Moo-hyun did, the president might choose to share administrative power with the prime minister – the latter appointed by the president but with the consent of the National Assembly – or make decisions after adequate deliberation with National Assembly delegates.

Notwithstanding, more often than not, presidents have used their constitutional prerogative to govern with as few constraints as possible. Furthermore, while former President Kim Dae-jung (1998-2003) pledged to change the presidential system to a parliamentary one, and advisory commissions were subsequently established to look into the issue, such promises have ultimately foundered on the “urgency” of other important national issues, a lack of consensus on which system to adopt, and the tendency of presidents to be unwilling to weaken presidential power once in office.

The impeachment of President Park Geun-hye earlier this year, however, gave renewed impetus to the issue of constitutional reform. Convicted by the Constitutional Court of the abuse of power and dereliction of presidential duties, Park was charged with a variety of offences. These included demanding bribes from prominent chaebols (South Korea’s large business conglomerates), preparing unlawful action against political opponents, entrusting a friend to make important political decisions and appointments, as well as failing to appear or act in the aftermath of the Sewol ferry tragedy in which over 300 people, mostly school children, died. Over a period of four months in the winter of 2016-17, despite the cold weather, millions of citizens gathered at Gwanghwamum Square in the center of Seoul to peacefully demonstrate in what became known as the Candlelight Revolution.

While some insisted that blaming the constitution failed to account for individual culpability, the majority of public opinion as well as political parties realized that flaws in the political system also enabled such a situation to arise. The need for constitutional amendment thus became a keystone issue in the subsequent election.

The most important key of this amendment is the decentralization of powers: that is, the dispersion of presidential powers and of centralized government. At present, there are two main proposals. The first, advocated by Moon’s governing Democratic Party, is to maintain the current presidential system, albeit with substantial checks and balances, as well as to change the current single five-year term to a four-year, two-term presidency, so making the president more accountable to the public at reelection. In short, it is argued that more properly independent and competent organs will function to temper the powers of the president.

The other proposal, favored by the opposition Liberty Korea Party, is the semi-presidential system, whereby administrative functions and competences would be divided between the president elected by the people, and the prime minister elected by the National Assembly. The reasoning is that such a system would make the administration more responsible to the legislative.

However, instituting a semi-presidential system may prove difficult after a long tradition of the presidency, necessitating time and cost to reform the substructure of the political system from head to toe. Furthermore, the division of powers and responsibilities between the president and prime minister could result in confusion or conflict, especially where many contemporary issues are cross-cutting.

Ultimately, however, both models necessitate a parliament with substantial supervisory power over the executive. This is currently problematic as it also relates to the party and electoral system, which is not specifically regulated in the text of the constitution but which is crucial for a functioning democracy. The current electoral system gives the larger parties a disproportionate number of seats in the National Assembly, leading to a dominant party system in which the voices of smaller parties are usually neglected. A more representative and effective National Assembly would also restore public confidence in it. As opinion polls consistently demonstrate, citizens’ trust in the Assembly is currently the lowest among public institutions.

Another important deficit to be fixed is granting greater autonomy to regional and local governments. South Korea exhibits a high degree of centralization of powers and finances at the national level. While this has benefited the Seoul region in particular, there has been a lack of balanced development with other provincial regions suffering from a lack of job opportunities and depopulation, among other challenges. The constitution currently only contains two broad, vague sections on local autonomy. There thus needs to be greater constitutional provision for local autonomy with the transfer of more substantive powers relating to education, legislation, and local finance. Again, however, there is a lack of consensus so far on how this should be realized in concrete terms regarding the extent of the devolution of legislative power.

Rushing into a New Era

The downfall of former President Park – the daughter of Park Chung Hee, South Korea’s strongman leader between 1961-79 – may herald the final chapter of the old authoritarian era. Indeed, South Korea’s engaged citizenry have expressed an intense aspiration to participate in the process of creating a new constitutional order.

In so doing, there is also an appetite to institute elements of more “direct democracy,” which might include the recall of MPs and ballot initiatives. Already there has been criticism, however, that the Special Committee on Constitutional Amendment, tasked with drafting the new constitution, has held public hearings which have been vague and lacking in substance.

But while improved public participation is essential, the main aim of constitutional reform should also not be lost. Democracy means not only participation but also sufficient deliberation of important issues. Thus instead of pandering too much to direct democracy and public opinion, which runs the risk of being manipulated by the mass media, greater priority needs to be attached to restoring the institutions of parliamentary and representative democracy. Central to this is also changing the electoral system to one of proportional representation, although this has yet to be advocated by a majority within the larger political parties.

Ultimately, the constitution should be the document of social and political consensus and a lasting blueprint for the future governance of the country. It would seem undesirable to speed up this process and put it to referendum in June next year where sharp differences still exist between political parties as well as the electorate. Indeed, it could serve to divide rather than unite. While there is concern that Moon’s resolve for amendment might waver if delayed, more important is that the National Assembly take the needed time to deliberate the issues properly as well as enable the public to feel ownership by being sufficiently involved in the drafting procedure. Prudence in attaining a broad consensus is essential for the people’s future constitution.

Dr. Seonhwa Kim is a legislative research officer at the National Assembly Research Service of South Korea. She is a Visiting Fellow to ISDP. The views expressed here are in a private capacity.