Religion and the Secular State in Kazakhstan 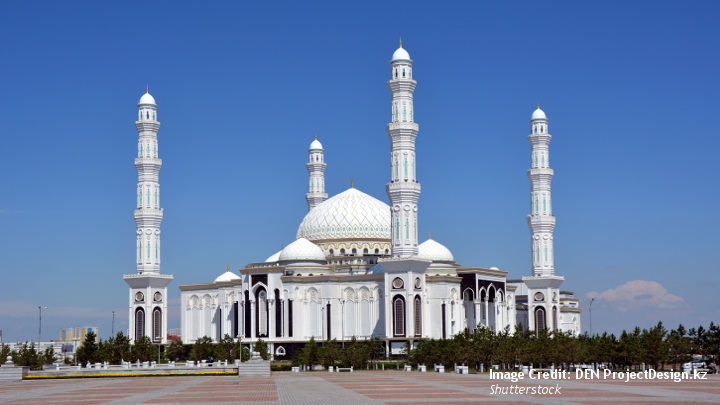 At independence, Kazakhstan shared with the successor states to the Soviet Union the challenge of replacing Soviet atheism with new state approaches to religion. Like the rest of Central Asia and Azerbaijan, Kazakhstan adopted a secular form of government. This makes the region stand out in the Muslim world, and is a source of pride for regional governments. Secular government should be a point of agreement between the region’s states and Europe and the United States. But instead, it has become a source of controversy, as Western states and organizations frequently criticize state policies in the religious sphere.

The term “secularism” is a broad brush, which includes a wide variety of approaches, including the American, French and Turkish models. When Americans speak of secularism, however, they almost exclusively take the U.S. model as a reference point. This study instead uses a continuum defining five distinct models of interaction between the state and religion. On one end is “Fusion”, a merger of political and spiritual realms. The next step is “Dominant Religion”, in which religious minorities are tolerated, but the state endorses one particular religion. In the middle of the continuum is the “State Neutrality” model exemplified by the United States; it is followed by what we call the “Skeptical/Insulating” model, as in France, which seeks to regulate and control religious influence on the state and society. Finally, the last model is the “Hostile” model, to which Soviet atheism can be counted.

Kazakhstan shares many commonalities with its neighbors, but also important distinctions. It is considerably more diverse in ethnic and confessional terms. Also, Kazakhstan’s Muslims were largely nomadic, and historically embraced a form of Islam with stronger mystical and syncretistic aspects. Until independence, Kazakhs never had their own Islamic authorities: the Ulama was either in Kazan or in Tashkent.

Soviet rule had immense implications on religious life. But Soviet rule was not just the attempted destruction of religion: Soviet leaders also purposefully encouraged alien Salafi-inclined religious ideas as competition to traditional religious beliefs. When Kazakhstan experienced a revival of interest in religion at independence, the population could not just return to pre-Communist traditions. Instead, Kazakhstan’s Muslim and Christians were both exposed to an onslaught of novel, foreign religious influences competing for influence – something government officials viewed with increasing concern.

A myriad of Islamic movements from Turkey, the North Caucasus, the Persian Gulf and South Asia competed for influence. Christian missionaries from Europe, North America and South Korea joined the fray, and targeted both the Russian Orthodox community and urbanized ethnic Kazakhs for conversion. While some groups were benign, there were also Salafi-Jihadi groups seeking to establish themselves in the country. Yet unlike its neighbors, Kazakhstan did not experience a serious challenge from religious extremism at independence – but since 2005, extremist violence has been on the rise. Kazakhstan ‘s extremism problem is connected to influences from the North Caucasus, the Afghanistan-Pakistan area, and the Syria-Iraq war zone.

Twenty-five years after independence, survey research shows that religion has returned to a prominent place in society. But in international comparison, it is clear that Kazakhstan’s believers stand out by opposing political manifestations of religion. Kazakhstan’s Muslims show exceptionally low support for Sharia law, at 10 percent; even among those supporting Sharia, only four percent support the death penalty for apostasy, and only a third support corporal punishment. Half of Kazakhs believe different religions lead to heaven, and that a person can be moral without believing in God. These numbers are off the charts in comparison with the rest of the Muslim world, and are indicative of a society deeply steeped in coexistence between religious communities.

Kazakhstan’s model of secular governance did not adopt an American-style policy of neutrality toward religious communities. Instead, the government took upon itself to regulate religion, thus gravitating toward the Skeptical/Insulating model and drawing on the French and Turkish experience. Going one step further, however, the Kazakhstani model differentiates between traditional and non-traditional religious communities. Government policies explicitly endorse and promote the traditional communities, and seeks to allow them to restore their position in society, while being hostile to the spread of non-traditional religious influences. That means Kazakhstan also borrows elements of the “Dominant Religion” model, though with a twist: it does not privilege one particular religion, as most examples of this model do, but traditional religions at the expense of the foreign and novel interpretations.

Over time, Kazakhstan has adopted increasing restrictions in the religious field, and new measures were passed following terrorist incidents in 2011 and 2016. A 2011 law prohibited foreigners from registering religious organizations, required the registration of places of worship, and prohibited the holding of religious services in private homes – a practice common to more secretive religious groups. The law also forced religious communities to re-register with the state, and required a minimum number of adult members for registration at the local, provincial, and national. As a result, some smaller or less established groups failed to register. The law also restricted the dissemination of religious literature, requiring approval by the Agency for Religious Affairs.

Following terrorist incidents in 2016, the government created a Ministry for Religious Affairs to protect secularism and moderate religious traditions. In particular, it was created to focus on the development of the country’s youth. Also in 2016, a compulsory course in “Secularism and Foundations of Religious Studies” became mandatory for ninth grade students. In 2018, further amendments to the law restricted minors’ ability to attend religious services, and tightened restrictions on foreign religious education.

Kazakhstan’s chief religious institution is the Muftiate, which works to coordinate religious practice with the state and is charged with training Islamic clergy. While the clerical establishment rests firmly on Hanafi Sunni Islam, Kazakhstan developed cooperation with Egypt to train its clergy, and created the Nur-Mubarak university for this purpose. Meanwhile, the country’s most recent two muftis were both trained at Cairo’s Al-Azhar Islamic university.

This raises questions regarding the possible influence of the stricter Islamic interpretations that dominate at al-Azhar. In addition, its influence contributes to hostility to Sufi practices, which provides a dilemma for Kazakhstan’s government – which characterizes both Hanafi Islam and the Sufi-influenced “Folk Islam” as traditional, but does not appear to account for the possibility of a conflict between them. This matter will be one to watch over coming years, and may require attention by the Ministry of Religious Affairs.

Meanwhile, Kazakhstan’s National Security Committee has taken the lead in fighting extremism. In particular, it monitors, infiltrates and prosecutes alleged extremists with considerable zeal. According to its own accounts, the organization has successfully intervened to prevent over 60 terrorist attacks in the country in the past five years. More controversially, it has also infiltrated and prosecuted groups engaged in nonviolent religious practices. These are typically prosecuted under a provision in Kazakhstan’s criminal code that prohibits propagandizing the superiority of one religion over another.

Events in the past decade led Kazakhstani authorities to conclude that they had underestimated the threat posed by extremist religious groups. Revisions to laws and policies have led to state intervention against individuals and communities that authorities deem extremist or non-traditional. This is one reason for the Western criticism directed against Kazakhstan.

However, another reason behind this criticism is a more philosophical disagreement: Western advocates support full religious freedom and state neutrality toward religion, accepting only intervention against groups engaging in or inciting violence. But Kazakhstan’s authorities operate on the basis of a fundamentally different principle: that it is the duty of the state to regulate religious affairs to ensure the revival of traditional religious communities, and to ensure stability and harmony in society.

Kazakhstan’s model is by no means perfect. If it was, the country’s leaders would not feel the need to make so many adjustments to it.  There is justified criticism that the state’s policies have erred on the side of excessive restrictions. Meanwhile, Western criticism of Kazakhstan’s policies also misses the mark, because it rejects the very premise of Kazakhstan’s policies – the Skeptical/Insulating model of a secular state. Because of this, much of Western criticism falls on deaf ears in Kazakhstan, and has little influence in the country. A more fruitful approach would be to accept the premises of the Kazakh model, and rather than take an antagonistic approach, work with Kazakh authorities to improve the country’s policies in the religious field. This could, over time, help Kazakhstan develop a model of relevance to Muslim-majority societies elsewhere.