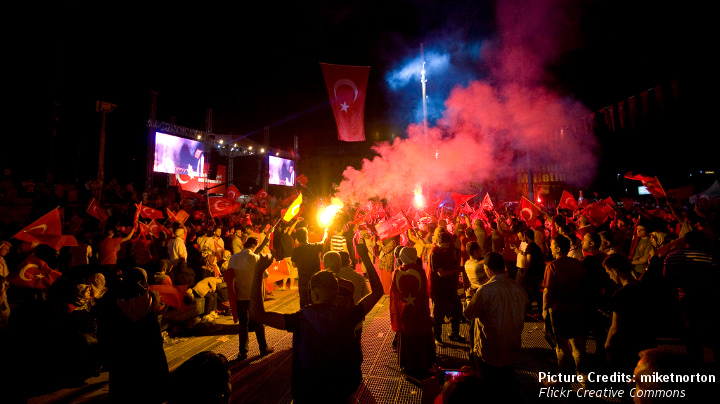 Whatever the outcome, the Turkish constitutional referendum on April 16 will not resolve the country’s chronic domestic instability, heal its deepening social divisions, revive its flagging economy or end its growing international isolation. But it will shape both the nature of the further turbulence to come and the duration of what is already the final stage of the Erdoğan era.

BACKGROUND: Born in 1954, Recep Tayyip Erdoğan first came to national attention in the early 1990s, when he issued a string of provocative statements, including declaring his commitment to the introduction of Islamic Shari’a law and famously describing democracy as “a tram that you ride as far as you want to go and then get off.” After he became mayor of Istanbul in March 1994, Erdoğan received a discreet visit from a delegation of members of the then still powerful Turkish military, who warned him to keep his thoughts to himself or face the consequences. Erdoğan duly complied, focusing instead on building a local political powerbase by overseeing a significant improvement in municipal services. However, in December 1997, in what he appears to have believed was the relative obscurity of a meeting in the south-eastern town of Siirt, Erdoğan recited a poem mixing military and Islamic imagery. A television crew happened to be present. Erdoğan was prosecuted, convicted of inciting religious hatred, forced to resign as Istanbul mayor and served four months in jail.

After the Justice and Development Party (AKP) first took office following the general election of November 2002, Erdoğan remained fearful of the military, muting any expression of his long-term goals and publicly espousing liberal values, while consolidating what was now becoming a national political powerbase. But the longer the AKP remained in power, the more confident he became – particularly after the inability of the Turkish Armed Forces to halt a series of show trials, including the notorious Ergenekon and Sledgehammer cases, demonstrated that the era of military tutelage was over. After the AKP won a third successive general election in June 2011, Erdoğan intensified his efforts not only to reshape Turkish society in line with his own interpretation of Sunni Islam but also to concentrate political power in his own hands.

Erdoğan also continued to demonstrate a rare ability both to judge the public mood and to manipulate the political agenda – diverting attention from scandals and failures by making controversial statements or abruptly announcing new initiatives, which were then quietly discarded before any real damage had been done. At his best when addressing public rallies, Erdoğan was a master of the cadences and inflections of the oratorical style favoured by Turkish demagogues, the punchy rawness of his rhetoric enabling him to connect with the Turkish masses like no other politician of his generation. Despite his sprawling wealth and increasingly cosseted lifestyle, to the urban and rural poor who formed his core support, Erdoğan remained one of their own – the Reis or “Chief”, who had risen from within their ranks. When he spoke, Erdoğan presented both himself and his supporters as the perpetual victims of injustice and oppression, while swelling their previously often deflated sense of national self-worth with visions of once and future greatness as Turkey reasserted itself as the pre-eminent power in the region and the acknowledged leader of the Muslim world.

However, within months of the June 2011 general election, Erdoğan suffered a major health scare. In November 2011 and again in February 2012, he underwent surgery to remove cancerous growths from his intestines. As he was recovering from the latter operation, his erstwhile allies in the Gülen Movement made their own bid for power by trying to discredit Hakan Fidan, the head of the Turkish National Intelligence Organization (MİT), and – at the time – one of Erdoğan’s most trusted aides. Erdoğan fought back. The result was a power struggle, which Erdoğan eventually won – albeit at the cost of exacerbating his predilection to see conspiracies in every shadow.

In April 2013, as he continued to receive treatment for a string of other ailments, tests suggested that Erdoğan’s cancer had again begun to spread. His doctors responded by increasing his medication. As irascible in private as he is in public, Erdoğan had always inspired as much fear as admiration amongst his subordinates. Now they reported that he had become more volatile than ever, although they were unsure whether the cause was physical, such as a reaction to the increased medication, or psychological in the form of Erdoğan’s heightened awareness of his own mortality.

Whatever the reason, Erdoğan’s once formidable political instincts began to desert him. In May 2013, he could have easily defused opposition to his plans to build a shopping mall in Istanbul’s Gezi Park by announcing that he would await the outcome of a court case about the project. Instead, Erdoğan vowed that he would push ahead with the mall regardless of the ocurt’s decision – and triggered not only the largest mass protests in the country’s history but, by ordering their brutal suppression by the police, sent his international reputation into freefall. Most perniciously, in what has now become his stock response to any setback or policy failure, Erdoğan blamed the protests on an improbably vast Western conspiracy and portrayed the protestors themselves as a treacherous fifth column. The result was to set Turkish society at war with itself and trigger the first of the now frequent violent attacks by AKP vigilantes against Erdoğan’s perceived critics and opponents.

IMPLICATIONS: Regardless of his long-term goals and dreams, during the AKP’s first years in office, Erdoğan had built a growing popular support base through largely democratic means. However, in recent years – and particularly since the failed coup of July 2016 – democratic norms and practices have been so eroded that it is no longer possible to talk of Turkey as a functioning democracy or a country governed by the rule of law. But the repression is also a sign of desperation, a tacit admission that Erdoğan can no longer remain in power without it.

Opinion polls currently suggest that the constitutional referendum on April 16 is too close to call. If Turks reject Erdoğan’s plans to introduce an executive presidency and formally concentrate virtually all political power in his own hands, he is expected to call an early general election, probably in fall 2017 – in the hope the AKP will secure a substantial parliamentary majority and enable him to continue with what is already a de facto autocratic presidential system. Although this would buy Erdoğan some more time, it would neither resolve Turkey’s mounting problems nor result in an easing of his still growing authoritarianism. Erdoğan would be aware that, in the event of a “No” vote, his critics and opponents – included the currently cowed dissenters within the AKP – would be emboldened. If anything, he could even become more repressive in his desperation to cling onto power.

Nor would there be any prospect of a respite if Erdoğan won the vote. Most of the new presidential powers envisaged by the constitutional changes are not scheduled to come into force until November 2019, after simultaneous presidential and parliamentary elections. Erdoğan would unlikely wait that long. Indeed, from his perspective, it would be very risky for him to do so.

Starting during the Gezi Park protests, and increasingly since 2015, Erdoğan has made his political survival dependent on maintaining a siege mentality amongst his supporters. It is a psychological rather than a merely juridical State of Emergence, in which he — as the embodiment of the “national will” – is under constant assault from foreign conspirators and their treacherous domestic collaborators. The result has not only been severe damage to Turkey’s social fabric and international reputation but also to its faltering economy – and the short-term measures that were recently introduced to boost the economy in the run-up to the referendum are likely to come with a high medium-term cost that will exacerbate an eventual hard economic landing.

In addition, the cumulative impact of constant social tensions, actual and anticipated terrorist attacks, conspiracy theories and rhetorical histrionics are already engendering widespread fatigue. In the continued absence of any achievements of his own, Erdoğan is likely to persist with his politics of fear. But he cannot maintain the current momentum until November 2019 without suffering a backlash, not least as a result of public weariness. Yet neither can he allow tensions to subside without the risk of attention shifting to his failure to provide solutions for the country’s problems.

Disturbingly, even though his growing authoritarianism suggests some form of awareness that power would otherwise slip from his hands, Erdoğan also appears increasingly unable to understand – or is indifferent to – the consequences of his actions. Indeed, the more he fails to deliver on his promises of peace, prosperity and international prestige, the more self-confident he seems to become.

One explanation may be Erdoğan’s isolation in what appears to be an echo chamber of trusted advisers in his grandiose palace on the outskirts of Ankara. It is also possible that the fact that, despite the gloomy prognosis in April 2013, he remains in remission from cancer and has seen off challenges from the Gülen Movement in 2013-14 and a disparate cabal of disgruntled officers in the failed putsch of July 2016 has convinced him that he is invincible. Nevertheless, the xenophobic invective of his attacks in March 2017 on the West in general, and Germany and the Netherlands in particular, are unprecedented – as was his extraordinary threat on March 22 that, unless they bowed to his demands: “There will be no street anywhere in the world where any European or Westerner will be able to take a step in peace and security.”

When combined with the increasing pressure on his domestic opponents and critics, such statements have ensured Erdoğan’s irrevocable alienation from the EU and the US. With the exception of Qatar – and to a lesser extent Kuwait – Turkey also has strained relations with all of the other countries in its region. While the manner in which the terms of its relations with Russia have been set by Moscow – and the ease with Turkey has been outmaneuvered in Syria – have demonstrated Ankara’s weakness, not its strength or its ability to increase its influence through alternative alliances.

Despite the delusions of Erdoğan’s hardcore supporters, Turkey is not strong enough to flourish in isolation. Indeed, Erdoğan’s relentless purges are accelerating the hemorrhaging of the country’s human resources – and further reducing its ability to resolve its own problems, much less shape the future of its region.

Autocrats have a habit of remaining in power long after rationality suggests that they should have gone. However, there currently appears little prospect of Erdoğan realizing his ambition of remaining in office for at least the next decade. A “Yes” vote on April 16 would not be regarded as legitimate, either internationally or by his domestic opponents, although it would prolong his political life expectancy. A “No” vote would shorten it. But, whatever the outcome, Turkey is unlikely to enjoy stability – much less peace, prosperity and prestige – while Erdoğan remains in power.