Turkey is Expecting a Restart with the U.S. 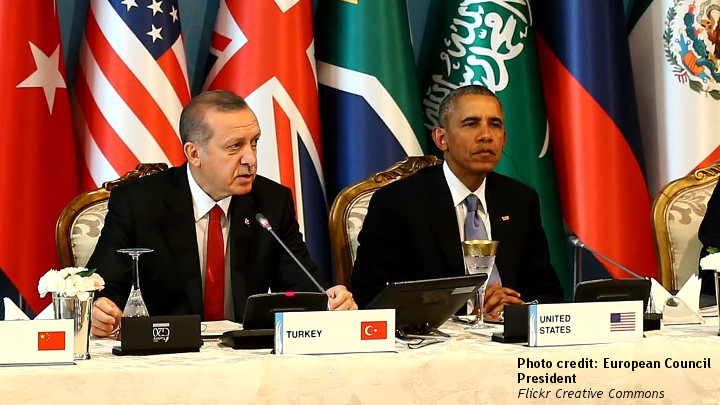 The Kurdish question has, once again, complicated Turkish-American relations. The rhetoric of anti-Americanism remains useful to whip up and mobilize nationalist opinion. Yet, Erdoğan’s Islamists are not any aspiring anti-imperialists. What they want – and what they expect that Turkey is now going to get – is simply a better “business deal” with the United States under Donald Trump.

BACKGROUND: The inauguration of President Donald Trump has been awaited with high expectations in government circles in Turkey. President Recep Tayyip Erdoğan was among the first world leaders who called to congratulate Trump upon his election. The expectation in Ankara is that President Trump is going to reset U.S.-Turkey relations that deteriorated during former President Barack Obama’s second term. Yet Erdoğan and Obama had gotten off extremely well. In an interview with Time magazine in 2012, Obama listed Erdoğan among five world leaders with whom he had been able to forge “friendships and the bonds of trust.” The others were the leaders of Great Britain, Germany, India and South Korea.

Internal developments in Turkey and diverging perceptions and visions in Syria have been behind the slump in relations. Stephen Hadley, a former National Security Advisor during the administration of George W. Bush, who has been visiting Turkey this week, says in an interview with the Turkish daily Hürriyet that the U.S. administration made a mistake by not taking the coup attempt in Turkey last summer, and the “threat that it posed to Turkish democracy,” seriously enough, and he notes that Washington did not condemn the coup attempt in unequivocal terms. Hadley also reminds that Fethullah Gülen “resides in the United States and continues to meddle in affairs in Turkey.” Third, he observes that there is “the matter of (the United States) supporting the PKK-related PYD (the Kurdish Democratic Union Party) in northern Syria.” These, “are understandable problems from the point of view of Turkey.”

However, the relation between Obama and Erdoğan had soured earlier. After Turkish police violently crushed peaceful protesters in 2013, Obama stopped taking calls from Erdoğan. In fact, problems between the U.S. and Turkey had been growing since the end of 2011, when the two countries had jointly engaged in bringing about an end to the regime of Bashar al-Assad in Syria. Initially, Washington and Ankara cooperated, with the U.S. State Department officials holding meetings with their Turkish counterparts in an effort to explore the possibility of easing the way for regime change in Damascus. There were also reports that the Central Intelligence Agency (CIA) was involved in transferring arms to what was deemed to be “moderate” Syrian rebels through Turkish ports.

But it soon became apparent to the two partners that their visions for the future of Syria differed. While Washington wanted to promote moderates and worked to build a broad opposition alliance, Ankara put its weight behind the Muslim Brotherhood and had no qualms abetting militant Islamist groups like the Nusra front that the U.S. had listed as a terrorist organization. Ankara’s motives were two-fold: the ruling Islamic conservative Justice and Development Party (AKP) has an ideological affinity with the Muslim Brotherhood movement. Second, and perhaps more importantly, Turkey became alarmed that the war in Syria offered the Syrian Kurds the opportunity to strive for autonomy, and starting in 2012 the Sunni Islamic militant groups – chief among them the Nusra front – that enjoyed Turkish support began attacking Syrian Kurdish positions.

While Erdoğan expressed public exasperation over Obama’s unwillingness to commit forces to bring about the fall of Assad, Obama came to view Erdoğan as an unhelpful ally who offered indiscriminate support to groups that the U.S. was not comfortable with. And Washington was exasperated that Ankara refused, until July 2015, to allow the use of its bases for U.S. attacks against the so called Islamic state in Syria. Ironically though, it has during the last months been Turkey that has complained about the lack of American support for the operation that the Turkish army has been conducting against the Islamic state inside Syria since last summer.

IMPLICATIONS: Mevlut Cavuşoğlu, the Turkish foreign minister, who is in Washington this week to participate at the inauguration of Donald Trump, complained that the United States had demurred on Turkish requests for air support for the Turkish troops that had run into trouble in their advance recently against the Islamic State. And he pointed to, what at the face of it, looks like American inconsistency: “They are using my air base, and they are not giving air cover.” In fact, what Washington fears is that the Turkish advances inside Syria are going to undermine the Syrian Kurdish forces on whom the United States relies to combat the Islamic State.

Effectively, there is no reason to doubt that Turkey’s main strategic goal with its Syrian operation is to acquire a position of strength vis-à-vis the Kurds. And seen from Ankara, Washington’s support for the Syrian Kurds is an expression of hostility against Turkey. Cavuşoğlu claimed that the perpetrators of the recent terrorist attacks in Turkey came from the Syrian Kurdish camps, but he stopped short of accusing the United States of supporting terrorism, like Erdoğan has recently done, saying that the United States has made itself a “hostage” to the Syrian Kurdish People’s Protection Units (YPG) that enjoy a symbiotic relationship with the militant Kurdistan Workers’ Party (PKK) in Turkey. Turkish media has reported that voices have been raised within the Turkish cabinet to deny the United States the use of the İncirlik air base as response.

However, the cabinet ministers reportedly also agreed that things are going to improve with Donald Trump’s presidency. Foreign minister Cavuşoğlu said that Turkey believes that Trump will resolve the Syrian Kurdish problem, while also anticipating that the new American president is going to add “new energy” to the fight against the Islamic State.

Trump has indeed stated that his number one objective will be to “destroy the Islamic state” as well as wiping out all other manifestations of the “Islamic radical terrorism.” One can thus imagine Trump and Erdoğan reaching an agreement that resets relations on the basis of combating the Islamic State: Erdoğan can be expected to tempt Trump with the offer of increased Turkish efforts on the ground in Syria against the Islamic State, in exchange for less American backing of the Syrian Kurds.

In a sense, Turkish-American tensions over Syria and the Syrian Kurds are a replay of what happened to the relations of the two allies over Iraq and the Kurds there in the 1990’s. United States’ backing of Iraqi Kurdish aspirations led to an upsurge of anti-Americanism in Turkey, with many Turks – including, notably, in the military – starting to suspect that Washington harbored plans to create an independent Kurdistan including also the Kurdish populated southeast of Turkey. This led to the perception, not least in military circles, that Turkey and the United States no longer shared geopolitical objectives, and that Turkey therefore needed to question its adherence to NATO and seek new strategic partners to the east, Russia and China. This Eurasian strategic thinking was eventually purged from the Turkish military when the AKP government and its Gülenist partners in the police and in the judiciary orchestrated the show trials that sent hundreds of military officers to prison, even though some of these have been returned to active duty after the break-up of the AKP-Gülenist alliance.

Turkey is now cooperating with Russia in Syria, and this week Turkish and Russian warplanes for the first time together attacked Islamic State positions in support of advancing Turkish ground troops. This has led to new question marks in the United States and Europe regarding Turkey’s future strategic orientation. But Cavuşoğlu dismissed all talk of Turkey “tilting” away from NATO and toward Russia.

There is nothing in the history of the ruling Islamists of Turkey that suggests that they would entertain any notions of teaming up with Russia instead of with the United States. The generation of Islamists that rules Turkey came politically of age as Cold Warriors, and in many cases their first political fights were fought against the anti-American left. The current speaker of the Turkish parliament in 1969 personally led a group of counter-demonstrators in support of the U.S. Sixth Fleet that had anchored in Istanbul. The AKP was founded by Islamists who realized that good relations with the United States are the prerequisite of political and economic success. When Turkey shot down a Russian warplane in November 2015, Prime Minister Ahmet Davutoğlu boasted that he had personally given the order to shoot down the Russian plane.

CONCLUSIONS: The Kurdish question has once again complicated Turkish-American relations. Anti-Americanism is useful to whip up and mobilize nationalist opinion. Yet, Erdoğan’s Islamists are nonetheless not any aspiring anti-imperialists. What they want – and what they expect that Turkey is going to get – is simply a better “business deal” with the United States under Donald Trump.

Turkey, a NATO member since 1952, has always had a special position among the allies of the United States.  At best always a highly imperfect democracy, Turkey has never belonged to the core, to the group of democracies with which America has formed a community based on values, not just strategic interests. But neither has Turkey been like Saudi Arabia, a strategic partner with whom the United States shares no values at all. Turkey was not “Western”, but neither was it typically Middle Eastern. Even though Turkey is not “tilting” to the East in any strategic sense, its development under Erdoğan has made it an even more awkward member than it used to be, of a group of countries that are supposed to be sharing democratic values. But that, on the other hand, may matter less for an American president who has displayed an unsentimental approach to world politics.