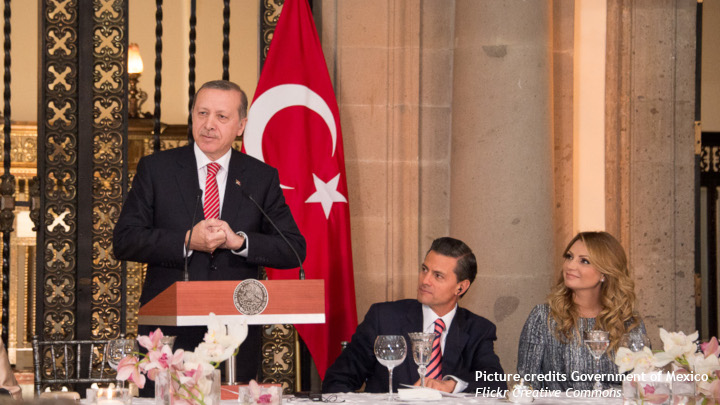 It is not President Recep Tayyip Erdogan’s “power hunger” that accounts for Turkey’s snap presidential and general election. Instead, raison d’état is behind this event, which will enshrine presidential rule. The abolition of parliamentary rule and the concentration of all executive powers to the presidency are designed to neutralize the Kurdish challenge. It is also intended to refurbish the authority of the state and lend it a renewed aura of strength after it was torn apart by the Gülenists. Reactions to Turkish developments should not be based on interpretations that neglect the primacy of the state’s interests and the impact of the Gülenist threat and Kurdish challenge.

On April 17, Devlet Bahçeli, the leader of the far right Nationalist Action Party (MHP) called for an urgent, snap presidential and general election. Bahçeli’s party forms an alliance with the ruling, Islamic conservative Justice and Development Party (AKP). On April 18, President Recep Tayyip Erdoğan and Devlet Bahçeli met for a brief meeting after which the former declared that snap elections are going to be held on June 24.The decision set in motion a two week long high-suspense political drama, as the main opposition party, the social democrat Republican People’s Party (CHP), and the Islamist Felicity Party moved to form a united opposition front with former president Abdullah Gül as its presidential candidate, which put “regime change” within reach. However, the bid was unsuccessful. CHP leader Kemal Kılıçdaroğlu and the leader of the Felicity Party Temel Karamollaoğlu, two unlikely political bedfellows, failed to bring along the leader of the newly formed rightist Good Party, Meral Akşener, who refused to abandon her own presidential bid.

On April 28, Abdullah Gül, who had not made any public appearance during the preceding two weeks during which his name was at the center of the political game, stated that he was not going to run for the presidency, as no broad consensus had been reached to endorse him.  “If there had been a broad agreement, then I would have assumed my responsibility. The contacts of Temel Bey (the leader of the Felicity Party) have shown that no such agreement exists.  I’m thus not a candidate,” Gül said.

However, there is also another and more important reason why Turkey is not going to see the two former close colleagues, the two main co-founders of the AKP, contest the presidency. The bid to launch Gül as the common opposition candidate triggered dissuasive counter-measures. The chief of the General Staff, General Hulusi Akar, together with İbrahim Kalın, the spokesman of President Erdoğan, was reported to have paid a late night visit to Gül’s Istanbul residence. The news was reported at the website of the daily Haberturk, but was quickly removed, after which the web editor was fired. The suggestion that Gül was dissuaded from running for president by the chief of the General Staff and the office of the presidency conjures memories of earlier military-civilian interventions in Turkish politics. In 1997, the civilian president and the military had jointly forced the resignation of the democratically elected government, and ironically, in 2007, the chief of the General Staff had made an unsuccessful attempt to prevent the election of Gül — who was then the candidate of the AKP — to the presidency. The attempt little more than a decade ago failed because the candidacy of Gül was in harmony with ascendant social and political dynamics that the state establishment ultimately also realized was in the interest of the state to accommodate. Today, however, Gül represented an unacceptable challenge to raison d’état.

Speaking on April 17, MHP leader Devlet Bahçeli emphasized the urgency of enshrining the presidential system which was approved in a referendum 2017, but which will not come into formal effect until after a new presidential and general election has been held. Bahçeli said that Turkey cannot afford to wait until November 2019, when a new president was going to be elected according to the ordinary schedule, suggesting that societal and political dynamics are at work that risk jeopardizing the cohesion of the alliance of the MHP and AKP. Bahçeli’s cryptic allusions suggest that the MHP leader is not taking his alliance partner’s long-term adherence to their common policies for granted.

In numerical terms, the MHP is the “junior” partner, but it is the nationalist ideology of the MHP that shapes government policies since 2015. The snap election pre-empts any attempt by the AKP to veer off the nationalist course in order to secure the Kurdish vote. A few weeks before the snap elections were called, the governing party was reported to be considering a new “opening” to the Kurds, in order to stem the rapid defection of Kurdish voters – not least as a result of Turkey’s recent military intervention against the Kurds in Syria. Turkish commentators speculated that Bahçeli forced Erdoğan’s hand before worsening electoral prospects for the AKP had put another Kurdish “opening” back on the table.

The presidential system is generally taken to be an expression of Erdoğan’s power hunger, yet it is Devlet Bahçeli who has pushed for it. It was the MHP leader who called for its rapid introduction after the failed Gülenist coup attempt in 2016. Indeed, the presidential system is a response to the dual challenge to the authority of the Turkish state that Gülenists and the Kurdish political movement, respectively, represent. It is explicitly designed to be a rampart against the latter.

In his April 17 speech, Bahçeli named the “presidential government system” – the official name of the new order – “the most important state reform during the history of the republic.” The abolition of parliamentary rule, and the concentration of all executive powers to the presidency, is effectively going to marginalize the Kurdish political movement and its party, whose presence in parliament will henceforth be inconsequential. Bahçeli has earlier explicitly argued this case, as when he said that the presidential system is not about Erdoğan and that it is in the interest of the state since the new order will ensure that Kurdish aspirations are checked by curbing parliamentarianism. (See February 3, 2017 Turkey Analyst)

Furthermore, the concentration of all executive power to the presidency serves the need of rehabilitating the Turkish state after it was torn apart by the Gülenists. The “presidential government system” is supposed to refurbish the authority of the state and lend it a renewed aura of strength. Yet this institutional arrangement will not in itself safeguard the state against a Gülenist return, unless the individual who exercises the presidential functions can be counted on to be vigilant and resist them. After the failed Gülenist coup of 2016, even many Turks who otherwise dislike Erdoğan have come to view him, the erstwhile Gülenist ally, as the only leader who has the strength and determination to keep the scheming sect at bay. Gül, meanwhile, has a reputation of “softness” toward the Gülenists; he has also maintained the “openness” to the Kurds that used to distinguish the AKP.  Devlet Bahçeli accused  Gül of “running the errands of FETÖ (the Fethullah Gülen Terror Organization),” for good measure adding that the Kurdistan Workers’ Party (PKK) would welcome him.

As president 2007 to 2014, Gül did indeed demonstrate a pro-Gülenist bias in his appointments to the Constitutional Court and to the universities. Neither is Bahçeli’s claim that the PKK would welcome Gül as preposterous as it would seem. Gül has lately been sounding out Kurdish community leaders, and his presidential candidacy enjoyed strong support within the pro-Kurdish (and moderately leftist) Peoples’ Democratic Party (HDP), where one faction wanted the party to endorse him. Fundamentally, Gül rejects the presidential system. In his speech on April 28, he advocated the principle of separation of powers, and a restoration of parliamentary rule would benefit precisely the Kurdish political movement.

Aydın Ünal, an AKP parliamentarian and a former presidential chief advisor, noted that Gül had a winning strategy: with the combined opposition vote, the Gülenists and their families, some of the pious/conservative voters, and backed by the good will of the West, the financial circles and international media, Gül would likely have beaten Erdoğan. In fact though, Gül’s candidacy elicited strong opposition among the secularist supporters of the CHP and many were outraged that their party was offering up an “Islamist” as its candidate. On the other hand, Gül would have easily won the Kurdish vote, which is estimated to represent eighteen percent of the electorate, and would also have carried the religiously conservative middle class that wants to enjoy good and prosperous relations with the West, and which is uncomfortable with the present image of Turkey in the West. In a sense, Gül would have resurrected the original bourgeois and cross-ethnic coalition that carried the AKP to power a decade and a half ago.

The “intervention” of the presidency and of the General Staff against Abdullah Gül’s presidential bid has revived the liberal historical narrative about how military tutelage prevents democracy from taking root in Turkey. Turkish liberals interpret this as yet another example of how the forces of the state prevent a democratic “middle class revolution.” In fact, historically, raison d’état and dominant social and economic dynamics have combined to keep Turkey authoritarian.  President Recep Tayyip Erdoğan called the snap election a “preparation for a coming earthquake,” indicating that tough measures can be expected in order to deal with what is a worsening economic situation and to attract foreign capital back to Turkey. Austerity measures are inevitably going to hurt the working class, but with the new presidential system, the state will be well-equipped to cope with any ensuing societal unrest.

Turkey’s Western partners need to recognize that Erdoğan’s “power hunger” does not account for the introduction of the presidential system, for the urgency to enshrine it or for the prevention of Abdullah Gül’s candidacy. Reactions to Turkish developments cannot be based on interpretations that neglect the primacy of raison d’état and the impact that the Gülenist threat and the Kurdish challenge have had and continue to have on the Turkish state.

This article was originally published in the Turkey Analyst.