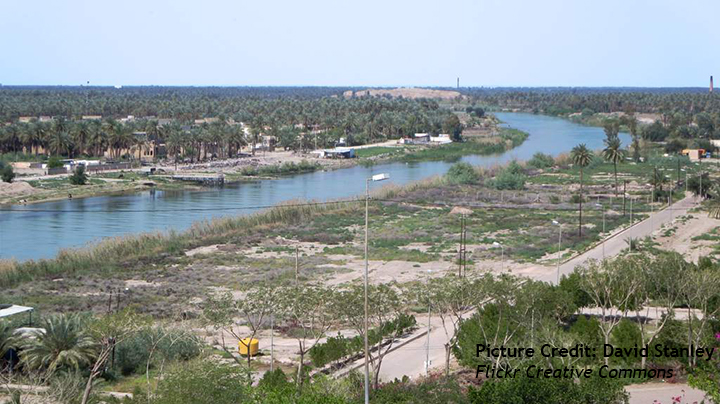 Mesopotamia, the land between the Euphrates and Tigris rivers, the cradle of our civilization, home to the first records of legal provisions about water resource management included in the Code of Hammurabi and of one of the earliest irrigation systems, is experiencing the results of severe water-related challenges. In the past decade, indeed, the two rivers have been affected by the impacts of climate change, inefficient water management, the development projects of upstream countries, and the absence of a framework agreement on the management of shared water resources between the riparian countries – namely Turkey, Syria, Iraq, and Iran.

Available data indicates that the Middle East, including the riparian countries of the Euphrates and Tigris rivers, will be among the region’s most severely affected by climate change, as average temperatures are expected to increase in the region at twice the global average. Increasing water scarcity will add further pressure on agriculture water availability, which will have a significant impact on food and employment security across the region. Over 60% of MENA populations live in areas with high or very high water stress and yet those most impacted areas produce over 70% of the region’s GDP.

An agreement on the Euphrates or Tigris is not without precedent. There have been efforts to establish institutionalized cooperative mechanisms in the past, when political relations between the countries flourished. Turkey and Syria signed a water allocation agreement for the Euphrates in 1987, and in 1980 Turkey and Iraq established a Joint Technical Committee (JTC). The latter remains, even if Turkish-Iraqi cooperation halted between 1992 and 1998, one of the most promising channels for technical inter-governmental dialogue on shared water resources, and also served as an important platform to establish shared knowledge of water and climate-related challenges in Turkey and Iraq.

The political will to cooperate was likewise manifested when bilateral Memoranda of Understanding (MoU) on water management were signed between Turkey and Iraq and Turkey and Syria in 2009, and again between Turkey and Iraq in 2014 and in 2017. The latter, which to date has been ratified by Iraq while for Turkey it is in the process of being ratified, includes, among other things, joint projects to strengthen understanding of how the region will be affected by climate change.

In 2019, Turkey appointed the former Forestry and Water Affairs Minister Veysel Eroğlu as Special Envoy for Water Affairs to Iraq. President Recep Tayyip Erdogan subsequently called for a long-term solution to Turkey-Iraq water issues. The main challenge, however, remains how to translate general manifestations of political will into a tangible long-term agreement that would also take into consideration future water availability and demands across the region.

Iraq and Syria regard the Euphrates and Tigris rivers as two independent international rivers, claiming that all the riparian countries should have equal shares of water resources. On the other hand, Turkey considers the Euphrates and Tigris to be one river system. Deriving from the Turkish understanding of the two rivers as one single basin, Ankara until now has not considered committing to a long-term agreement on the Tigris river, as wished by other riparian countries. Given the fact that Turkey and Syria abrogated their bilateral relations in 2012, a framework agreement on water allocation that would include all Euphrates and Tigris riparian countries is thus unlikely before there is a change in the political scenario. Both Iraq and Turkey, nevertheless, support inter-governmental cooperation on finding a sound technical solution to the current situation and the forthcoming challenges. Turkey also agreed to temporarily stop filling the Ilusu Dam in June 2018 amid severe drought and water scarcity in Iraq that resulted in violent protests in Basra. At a later stage, the two countries reached an agreement establishing that Turkey will release 75% of water into the Tigris river while filling the dam. Nevertheless, Turkey’s uncoordinated development continues to raise concerns in Iraq, while Turkey calls for increased water efficiency in downstream countries.

Most of the media focus on riparian relations in the Euphrates and Tigris region is on bilateral relations between Turkey and Iraq, although the upstream development in Iran on the Tigris tributaries also has an impact on water availability in the region. For instance, the Kharke and Karun rivers that support the Hawizeh marshlands in Iraq have been severely depleted by Iranian water projects. Despite the improvements in political and security cooperation between Iraq and Iran, their bilateral dialogues on water issues have not registered any progress.

All riparian countries agree that the region needs to strengthen its resilience to climate change impacts. Increasing water scarcity will have dire socio-economic repercussions, with additional subsequent political impacts. In Iraq alone, about 70% of the workforce is employed in the agriculture sector, which depends on transboundary waters for 80%. In the past, farmers who lost their livelihoods due to droughts were targeted by recruiters from terror networks like ISIS/Daesh.

To address these challenges, what is needed is a continuous effort to improve water efficiency across the whole region – increasing agriculture water productivity, modernizing the irrigation systems, reducing water losses and combating seawater intrusion in southern Iraq and Iran – while building institutional capacity in water governance at multiple levels. Informal cooperative efforts, such as the Euphrates Tigris Initiative for Cooperation and the Collaborative Programme Euphrates and Tigris, have contributed to strengthening joint understanding of the main challenges affecting the rivers, and also greater awareness of the opportunities and the possible technical solutions in the region. What is needed now is a strong link between the available technical knowledge and the manifested political will to find a sustainable solution to the regional water crisis in the Euphrates and Tigris region.

This article was originally published as part of the ISPI Dossier MENA’s Fertile Crescent in the Time of Dry Geopolitics. Find it here.