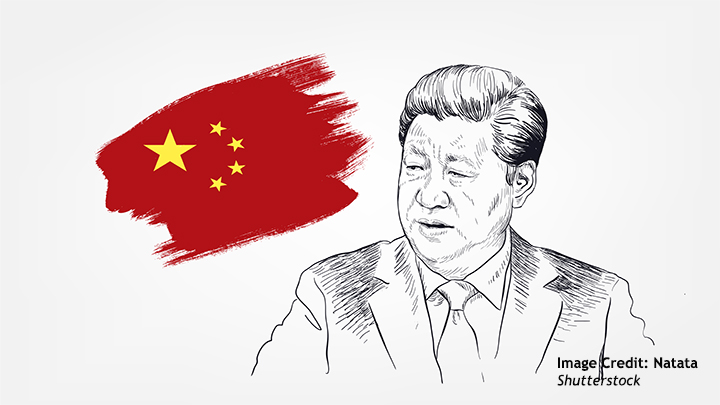 The Party Constitution of the Communist Party of China (CPC) and the “un-written” State Constitution of the People’s Republic of China (PRC) determine the legal developments that take place in the country while accentuating the already blurred lines between State and Party. How does the CPC, and President Xi Jinping, serve as the drivers of constitutionalism and transcend the theoretical and political powers of the State? This Focus Asia paper seeks to answer this question and offers an overview of the amendments to the State Constitution, while also highlighting changes made to the Party Constitution that have taken place under Xi Jinping, who serves as the General Secretary of the CPC, Chairman of the Central Military Commission (CMC), and the President of the PRC. The paper attempts to review the nuances attached to such revisions that are emblematic in an authoritarian system to uphold regime stability. In order to best examine this issue, focus is put on how the recent constitutional revisions have strengthened Xi Jinping’s rule. With analysis of “Xi Jinping Thought on Socialism with Chinese Characteristics for a New Era” and the abolishment of term-limits for the presidency, this paper highlights the importance of constitutional amendments for Xi’s domestic political strategies and also explains how embedded the CPC and the National People’s Congress (NPC) are in the governance of China, all but erasing the demarcation between State and Party.

The PRC is presently in its fourth constitution, adopted in 1982 with revisions every five years. It vests national legislative powers under the control of the NPC as well as its Standing Committee. The executive bodies responsible for enacting laws are the State Council and the Standing Committee. Chinese citizens who are 18 or older exercise direct popular suffrage in order to elect members of the People’s Congress up to the county level. The elected county members choose representatives for higher echelons of the Congress. Decision making power in the PRC rests with the executive organs of the state and the CPC. Nationally, the highest executive organ is the State Council led by the premier with the constitution allowing for the appointment of state councilors, vice-premiers and secretaries-general. This group of officials meet as the Standing Committee of the State Council and exercise major power in day-to-day decision making. Along with the NPC, the Standing Committee exercises legislative power which extends to the enacting and amending of statutes, taking on the major bulk of legislative work.

The Constitution, the CPC and Xi

Nonetheless, it is important to remember that in China, the actual power and authority rests with the CPC, which is considered both above and in itself, the state and law. Hence, it is the General Secretary of the CPC who holds the most important role in the country. This position has been held by Xi Jinping since 2012 – a year before he was appointed to the office of President of the PRC. The Constitution stresses the “Chinese characteristics” embedded in a “socialist theoretical system” that embodies important policies present in the CPC’s system itself. Essentially, this terminology attests to the great structural and power changes China has gone through over the years, redefining political concepts along the way to suit the present day challenges faced by the government. For instance, Deng Xiaoping redefined the category of “workers”, by including intellectuals who worked using their minds. Similarly, while a planned economy is considered as vital in a socialist structure, and market economy conversely is categorized as capitalism, Deng revitalized the economy by making use of the latter and devising a socialist market economy model. Hence, the socialism practiced in China has decisively “Chinese characteristics”, with this becoming a common phrase in diplomatic rhetoric and official discourse of the CPC.

An important distinction needs to be made to explain the supremacy of the CPC. Every five years, the CPC convenes the National Congress of the Communist Party of China (NCCPC), also referred to as the National Party Congress. The NCCPC is theoretically the highest body of the CPC and sets major policies and constitutional amendments to the CPC constitution every five years. The NCCPC also selects members of the Central Committee who work as a board of directors for the CPC and in turn select the twenty-five Politburo members. The Politburo is responsible for finalizing the Politburo Standing Committee which is the epicenter of power for the CPC leadership, headed by the party general secretary.

The political monopoly of the CPC has held relatively steady since the inception of PRC in 1949. The party has seen the PRC through rapid double-digit economic growth, challenges both abroad and at home, and has established the country as a global power to be reckoned with. This is further highlighted by the fact that even amidst the Covid-19 pandemic, which has seen an increase in anti-China rhetoric globally, Beijing’s integration in the globalized world and international dependency on China driven manufacturing supply chains will most likely continue. Since taking power, President Xi has strengthened his control over the CPC, becoming the most powerful leader the nation has seen since Mao Zedong, if not even more powerful. The 18th NCCPC held in 2012, marked the transition of power from Hu Jintao to Xi Jinping; the 19th NCCPC in 2017, marked the solidification of Xi’s “strongman” image, his control over the CPC and his rise as a decisive leader. The constitutional amendments, implemented in 2018, marked the further blurring of lines not only between the State and Party but also between the Party and Xi; therefore, a threat against Xi is a threat against the integrity of the CPC.

Due to the CPC driven structure, the Chinese constitution can reflect on historical events such as revolution, self-reliance, or reforms in a more adaptive manner. The NCCPC and the NPC have the power to amend respective constitutions as per the realities of their survival and growth needs. Hence, even though China’s constitution is not enforced, the country still practices constitutionalism, as instead of just being an amalgamation of written laws, the constitution also fluidly reflects unwritten social structures. The normative aspect of the Chinese constitution draws from its ability to end or review revolutions rather than serving as a protector of rights. Post-1949, the constitutions China has implemented have been results of revolutions the PRC has ended, rather than being representative of contracts between people and the State. For instance, the 1949 revolution created the first constitution of the PRC in 1954. The second constitution of the PRC in 1976 preserved, while the third constitution in 1978 ended, the Cultural Revolution. The fourth constitution (currently in force) was a culmination of the lessons learnt during the Cultural Revolution. The present constitution also draws from the “Resolution of the CPC on Certain Historical Issues since the Founding of the PRC” as well as the pivotal 3rd Plenum of the 11th Central Committee which marked the decided shift of CPC efforts towards “socialist modernization”.

Xi is the General Secretary of CPC, the President of the PRC and the Chairman of the Central Military Commission (CMC); amongst these, it is his control of the CPC that is most crucial to his consolidation of power in China. Hence, the latest set of constitutional amendments are more about the CPC itself than Xi.

The 19th NCCPC in October 2017 deliberated upon and unanimously adopted revisions to the Constitution of the CPC. Arguably one of the most important amendments incorporated to the party constitution at this stage was the inclusion of “Xi Jinping Thought on Socialism with Chinese Characteristics for a New Era”, as a guiding principle. The addition underscored Xi’s power over the party and elevated him to the level of “great” leaders like Mao Zedong, Deng Xiaoping and Jiang Zemin. Following this addition, the NPC of the PRC during its annual session in March 2018, incorporated the same rhetoric into the state constitution as well. Xi became the first leader since Mao to have an eponymous ideology imbedded into the constitution whilst still in office; Deng Xiaoping Theory was included post his death in 1997. The March 2018 amendments marked the first time in 14 years that the state constitution had been changed. The amendments in the Chinese constitution take the form of articles that are either additions or revisions to the text; the 2018 amendments added a total of 21 articles, effectively moving away from Deng’s reforms and replacing the same with a “Xi Jinping constitution”.

Both the Party and State constitution have adopted the “Xi Jinping Thought on Socialism with Chinese Characteristics for a New Era”, endorsing it as an additional guiding principle to “Marxism-Leninism, Mao Zedong Thought, Deng Xiaoping Theory, the Theory of Three Represents, and the Scientific Outlook on Development”. The indoctrination of the “Xi Thought”, now supported with legal basis, began to see programs dedicated to its study in research and educational institutions soon after its implementation. This marks the increasing ideological command the CPC has on the pedagogy of China’s youth, highlighted within the CPC’s Communist Youth League, and attempts to keep the younger generation in line with the “Xi Thought” by dedicating education to the same. The “Xi Thought” embodies a CPC-first approach and reduces the likelihood of the party splitting into factions. Moreover, this ideology at the theoretical level clarifies eight fundamental issues and also has 14 fundamental principles, all ultimately dedicated to ensuring a “CPC-First” approach.

The 2018 amendments also furthered Xi’s anti-corruption drive by reforming the supervisory system and creating Supervisory Commissions that would become state organs. The Commissions, marking major adjustments in the nation’s State apparatus, were created at both the national and state level. Another major amendment to the constitution was the elimination of term limits for the presidency of the PRC. The erstwhile limitation of no president serving over two consecutive terms was done away with, giving Xi the chance to stay in power for as long as he wishes to; this seeks to support a trinity system which China follows wherein one leader, such as Xi, occupies all three posts of president, President of the PRC, CPC General Secretary and CMC Chairman. The rationale behind creating a term limit, which had not existed before 1982, stemmed from the aim to prevent a ruling period like that of Mao again and aimed to prevent the extreme concentration of power in the hands of one individual for a long time.

Xi and the Future of the Chinese Constitutions

The “two sessions” of the NPC and the Chinese People’s Political Consultative Conference (CPPCC) in 2020 (amidst the Covid-19 pandemic) have also presented an active thrust by Xi Jinping to maintain his power while presenting an un-wavering image of the PRC abroad. While these are not constitutional amendments, the legislation regarding China’s first civil code and the national security law for Hong Kong are of immense importance to the next five-year plan. The strengthening of national security laws comes at a time when the CPC is gearing up to celebrate its first centenary goal in 2021, marking 100 years of its existence. The second centenary goal concludes in 2049 and constitutional amendments will be made keeping the same in mind. The changes to the constitutions are made to ensure the CPC strengthens its authoritarian rule and discourages a repeat of demonstrations like the 1989 Tiananmen Square Protest. In this equation, the power and authority of Xi Jinping plays a vital role; by strengthening CPC control, he is also blurring the demarcation between himself and the Party, similar to the demarcation between Party and State in China.