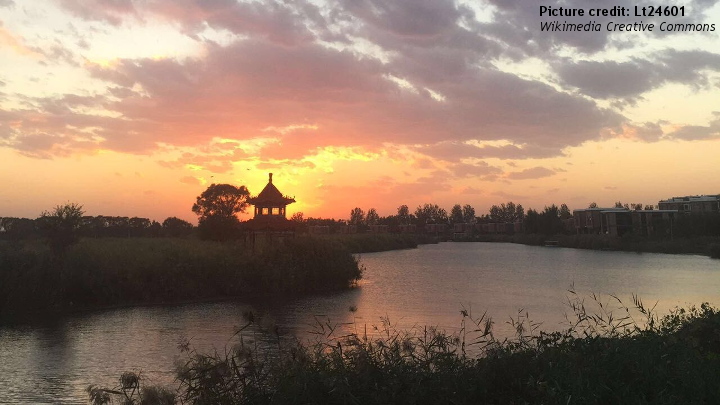 Ms. Fatoumata Diallo gives her views on Xi Jinping’s plans to create a new innovative development zone in the city of Hebei. Is this project intended to project China as a leading hub for smart cities? Or perhaps part of a strategic move by the President to link his term in office with a monumental urban redevelopment venture to rival that of large-scale reform efforts by his predecessors?

On April 1, 2017, President Xi Jinping unveiled plans to create the Xiong’an “New Area”. This innovative development zone has been cast as an integral piece of the “crucial strategy for the millennium to come” and is part of a drive to cement China’s credentials as a leader in urban development and the incorporation of new technologies into infrastructure. Some regard the project as a strategic move by President Xi Jinping to instigate an urban miracle linked to his term in office, akin to the Shenzhen Special Economic Zone and the Shanghai Pudong “New Area”, which are associated with the administrations of Deng Xiaoping and Jiang Zemin respectively. Located approximately 130 km to the southwest of Beijing and Tianjin, the “New Area” will have a substantial impact on three existing counties in Hebei province: Xiongxian, Rongcheng and Anxin. Whatever the forces driving it, this ambitious initiative is set to become a major testing ground for innovative models of growth and urban development in China.

A New Rival to Shenzhen and Pudong

Both Shenzhen and Pudong hold key positions in the historiography of modern China, which places a heavy emphasis on the government and party’s ability to enact reform to the benefit of the population. Deng Xiaoping, lauded as the chief architect of China’s market reforms and opening-up policy, is credited with transforming Shenzhen from an impoverished fishing village into a high tech-metropolis, while Jiang Zemin can claim to have built the once laggard Pudong District into a key financial center. For Chinese leaders who wish to take a more active role in the promotion and development of global governance, the implied narrative of elevation out of obscurity is immensely appealing. At the same time, an approach to develop and refine policy based on a sort of experimentation is also vital for a country the size of China.

President Xi has made it clear that he intends to elevate Xiong’an to the same near mythical heights of the preceding two zones of urban innovation, albeit with a few minor differences. The project is the first of its kind to receive simultaneous endorsement from the Central Committee of the Communist Party of China (CPC) and of the State Council, and the leadership has already pledged to invest several billions over the next few years to develop the “New Area”. Xi’s decision to appoint the former Party Secretary and Mayor of Shenzhen, Xu Qin, as deputy party secretary of Hebei province also speaks to the importance he has placed in this project.

Some analysts argue that Xiong’an might fall short of the goal to emulate the successes of its predecessors as these were the product of a unique combination of circumstances and specific strategies that cannot be easily replicated. However, the overall priorities and policy options are different today than they were for previous Chinese governments. Moreover, the incentives for the establishment of this new area diverge slightly from the preceding innovations efforts at Shenzhen and Pudong. In the Xiong’an “New Area” the goal is not to create yet another megalopolis, but rather to establish a world-class conurbation based on a new Chinese model of urban development.

One of the primary incentives for the establishment of Xiong’an is to shift functions that do not require immediate proximity to the seat of government away from Beijing in order to ease burdens on urban administration caused by issues such as over-population, traffic congestion and soaring housing prices. To better structure the capital’s urban environment, a significant number of state-owned enterprises’ operational centers, educational and health institutions, research centers, corporate headquarters as well as high-tech and finance firms are gradually being moved.

Xiong’an will also serve as a catalyst for the development of the wider Beijing-Tianjin-Hebei region, sometimes referred to as Jing-Jin-Ji. In particular, the project is being designed to help transform Hebei from a relatively poor agricultural region into a technological innovation hub. The overall objective is to create a new engine of growth for China’s economy in core areas. This is sorely needed at a time when the potential for economic upheaval is growing, with the very real possibility of aggravating long-standing grievances over the equitable allocation of resources in the wake of Chinese economic ascendance. The internationalization of China’s wealth production means that the country is more vulnerable to external shocks than ever before, a realization that is being driven home by greater strain on Beijing’s command economy, largely brought about by the trade war with the U.S. At the same time, Xiong’an will also lay fertile grounds for increased investments in technology, innovation, finance and eco-industries. Therefore, the projects that fall under the auspices of the Xiong’an “New Area” may well offer cooperation possibilities for European enterprises that possess relevant competencies.

A core aspect to further regional integration is a drive to improve connectivity through the construction of a comprehensive and efficient transportation network. Long a difficulty for the relatively poorly integrated inland regions of China, efforts to improve links with urban centers have featured prominently in the domestic politics of the country. The authorities have pledged to spend 91 billion USD on infrastructure by 2020. Four high-speed train lines will run through the “New Area”, including one that already connects Xiong’an to Beijing. The area will also be serviced by three airports in the surrounding area: the new airport of Beijing, Tianjin airport and Shijiazhuang airport. In addition, four new Beijing subway lines dedicated to serving the greater Xiong’an are also expected to open within two to three years.

A City of the Future

Xiong’an is not only undergoing a rapid transformation with the goal of relieving the strained capital, but also strives to become a world-class, eco-friendly, smart city, areas that the authorities are keen to incorporate in future urban planning endeavors. In this context, the integration and application of the Internet of Things (IoT) technologies, artificial intelligence, big data and cloud computing has been strongly encouraged in the planning and designing of the city. Much as the economic adjustments of the 1980’s and 1990’s found expression in the gradual implementation of new policies and strategies in the special economic zones, so too are new technologies finding their place in the new area’s development.

According to the Chinese authorities, the use of these new intelligent technologies will bring far-reaching changes in terms of urban development. The hope is to be able to plan in such a way that those innovative technological tools will not only improve energy efficiency but also reduce management expenses. A special emphasis has been placed on building so-called intelligent infrastructures with features such as smart sensors and lighting, as well as facial recognition systems, all of which are conceived of as ways to reduce time and manpower being invested in these areas. In order to optimize space management, some of the transport, water and electricity infrastructure will also be built underground.
Several leading Chinese companies have already signed cooperation agreements with Xiong’an’s local government. Baidu has been testing self-driving vehicles equipped with its “Apollo platform” and China Mobile has made similar demonstrations with its new 5G remote control driving technology. Alibaba, which has opened three subsidiaries in Xiong’an, has introduced its Artificial intelligence “City Brain” platform designed to improve traffic management.

The creation of Xiong’an New Area echoes President Xi’s efforts to pursue green development policies and build an “ecological civilization.” The key objective is to design a sustainable model of urban development that would balance economic growth with environmental protection. Considering that Hebei province has traditionally hosted heavy polluting industries, ecological restoration is shaping up to be a long and costly challenge. In particular, the Baiyangdian lake, China’s largest fresh water lake, has become so polluted that it cannot be used for agriculture, let alone as drinking water.
Nevertheless, since the establishment of the area, the local government has increased clean-up efforts and cracked down on polluting industries. Several of the preceding chapters of China’s economic modernization were imprinted with a heavy environmental toll, a feature felt especially acutely in comparatively marginal farming communities. Therefore, the incorporation of elements designed to promote environmental protection is a significant departure from earlier practices, and forms a potential intersection between Chinese economic priorities and international environmental commitments that could afford European private and public sector entities the opportunity to find common cause with their counterparts.

Beyond the immediate needs of rationalizing energy grids and other public services with a view toward increasing efficiency, keeping down costs and saving time, the smart city’s approach affords numerous opportunities to advance environmental protection measures. For example, in November 2017, authorities in Xiong’an launched a massive afforestation plan with the aim to increase forest coverage to 40 percent. To achieve this, the implementation company built a smart platform based on blockchain and big data analysis to provide digital identification for each individual tree.

Furthermore, just as in other Beijing-backed innovation and governance projects, Xiong’an is designed to be predominantly powered by renewable or low-carbon energy. Electricity, generated from wind, solar panels and nuclear power, will account for more than 50 percent of the overall energy consumption. Local authorities will also make full use of the rich geothermal resources to provide heating and supplement the use of natural gas.

Beijing also plans to introduce innovative green financing initiatives, some of which would leverage both blockchain and fintech, as part of the scheme. For instance, the China Beijing Environment Exchange (CBEEX) and U.S.-China Green Fund jointly established a 10 billion RMB Carbon Fund which will invest in high-quality projects in low-carbon sectors but also support the nation-wide emission trading market. The China Green Finance Committee also partnered with London to set up a UK-China Centre for Green Finance which will help develop financial instruments to fund a number of projects in Xiong’an.

Ms. Fatoumata Diallo is a trainee at the EU delegation to China in Beijing and a former Junior Research Fellow at the Institute for Security and Development Policy’s Stockholm China Center. She holds a MA degree in Chinese Studies from the INALCO, Paris and a MA in International Relations from the University of Leiden, the Netherlands.