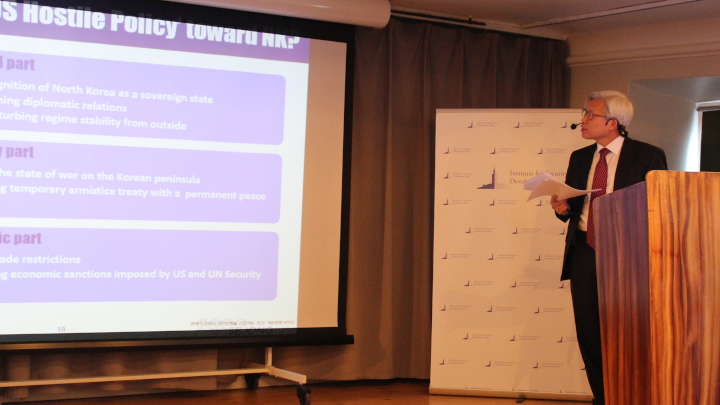 On March 1, 2019, ISDP hosted a public forum entitled “After the Trump-Kim Summit – Assessing the Deal” examining the breakdown in Hanoi and the results which ensued. For the first half of the forum, a keynote presentation was given by Dr. Sang Hyun Lee, Senior Research Fellow at the Sejong Institute, Seoul, and a Visiting Fellow at ISDP. Dr. Lee’s presentation focused on the lead up to the second summit and possible steps to continue dialogue between the U.S. and North Korea after some setback. The presentation was followed by a panel discussion with Dr. Lee alongside Dr. Niklas Swanström, Executive Director of ISDP, Major Gen (ret.) Mats Engman, Distinguished Military Fellow at ISDP, and Dr. Sangsoo Lee, Head of the ISDP Stockholm Korea Centre, and moderated by Dr. Lars Vargö, Distinguished Fellow at ISDP.

During the first segment of his presentation, Dr. Lee highlighted how the heightened optimism leading up to the second summit may have had reduced the urgency for ascertaining a deal. Many observers expected concrete steps towards denuclearization of the Korean Peninsula and further normalization of U.S.-DPRK relations, the positive rhetoric coming from both leaders supported this notion. However, Dr. Lee was not surprised to see their negotiating positions were at loggerheads. The U.S. inclusion of nuclear sites and uranium facilities, which were undisclosed by North Korea (extension of Yongbyon, Yeongjeo-dong etc.), coupled with North Korea’s request for key sanctions to be eased led to both parties leaving without a deal. Despite this disappointing outcome, Dr. Lee viewed it as yet another victory for Chairman Kim because the world must cope with a nuclearized North Korea for the time being. China will also be pleased with the outcome, as their influence over the Korean Peninsula and role in peace talks could see them take the reins from the U.S. if negotiations are to completely deteriorate.

Moving forward, Dr. Lee emphasized that an onus should be placed on the “small deal mentality and not the big deal discussion that followed Singapore (Singapore Summit in May 2018)”, with more realistic expectations providing a platform for tangible progress. Another point of contention for future dialogue between the U.S. and North Korea will be how each nation defines “denuclearization” in the context of the Korean Peninsula. The crux of the U.S. definition is the “Complete, Verifiable, Irreversible, Dismantlement” (CVID) of DPRK facilities and weapon stockpiles, while North Korea believes the U.S. nuclear umbrella, which covers both South Korea and Japan, should also be removed. Moreover, in order to advance the peace process, it is essential for those parties involved in the Korean War to officially end the conflict. From this starting point, Dr. Lee made the point that bilateral negotiations (both U.S.-DPRK and inter-Korean) could become more effective, and possibly lead to international endorsement and a multilateral security mechanism to assist in the denuclearization of North Korea.

Following Dr. Lee’s presentation, the panel discussion sought to dissect the Hanoi Summit, and how, if at all, the negotiating positions have changed. All four panelists concurred that the outcome of the dialogue was disappointing, but that no-deal was better than a bad deal. They also agreed that the “biggest loser” of the second Trump-Kim summit was President Moon Jae-In of South Korea, as the peace process, he had so strongly advocated for, will surely stall. With U.S. elections on the horizon, and President Moon already two years into his single five year term, the window of opportunity to significantly advance peace talks is growing narrower. Dr. Niklas Swanström pointed out that China has made significant gains as a result of the Hanoi dialogue, as the upcoming U.S. – China talks will be “dictated by China as Trump needs to return home with a foreign policy victory to aid his domestic reelection campaign”.

When questioned about multilateral talks (I.E: Six Party), and whether they could offer a new dimension to the bilateral negotiations, all the panelists thought they would be ineffective at the current stage of discussion. Instead, all believed there will be a pause in progress between the U.S. and North Korea, however, Dr. Sangsoo Lee insisted some working-level talks “must continue” in order to maintain a level of momentum until the next high-level meeting.

Asked whether joint U.S.-ROK exercises will resume in the near future, Major Gen Mats Engman said it is a “likely possibility”, although they will be a fraction of their normal scale. While this may be seen as a risk of reescalation, Major Gen. Engman believed the U.S. must maintain its military readiness in order to validate its troop deployment in the region to the host nations (Japan and South Korea).

In conclusion, the consensus was that both Chairman Kim and President Trump approached the second summit with inflated expectations and no clear path towards obtaining their goals. In his closing remarks, Dr. Sang Hyun Lee cited the positive North Korean media coverage of the Hanoi summit as a promising sign that dialogue will continue, which hopefully will yield substantial progress towards the peace process and denuclearization on the Korean Peninsula.

ISDP would like to thank Dr. Sang Hyun Lee, the panelists, and the members of the audience for participating in the discussion.

Watch the video of the event here or below.