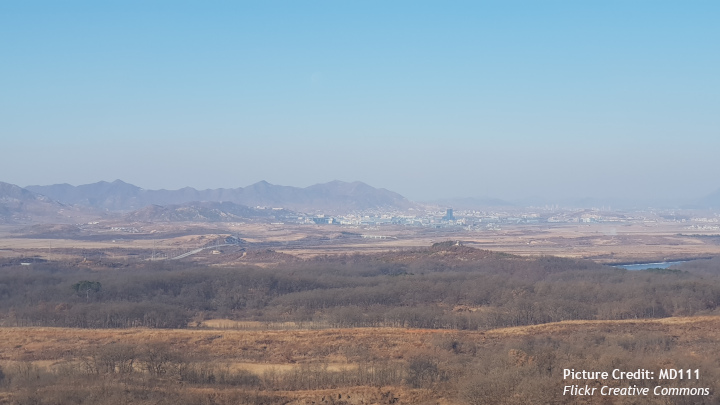 Venerated in art and poetry, Korea’s verdant mountain forests hold a special place in Korean people’s hearts. Like their political systems and economies, however, forest fortunes in North and South Korea have gone in very different directions since the country’s division more than 70 years ago.

If you stand at the observation post at Paju, on the heavily militarized border between the two Koreas, and compare the views, the contrast is striking. The South is characterized by densely and attractively forested hillslopes. But across the DMZ, if you look past the statue of North Korea’s founding father Kim Il Sung and the moribund Kaesong Industrial Complex (a joint economic project both Koreas hope to revive), severely denuded slopes stand desolate in the summer haze.

Since assuming power in 2011, however, Kim Jong-un has recognized the severity of the problem, and made rehabilitating North Korea’s degraded forests a strategic priority by transforming the country’s mountainous topography into green forests.

The problem has long roots. Under Japanese colonial rule between 1910 and 1945 as Korea underwent rapid industrialization, overcutting was exacerbated by the ravages of the Korean War. The damage included widespread aerial bombardment and use of scorched earth tactics. By the end of the war in 1953, it is estimated that nearly half of Korea’s forests had been destroyed.

South Korea implemented a National Forest Plan in 1973 to successfully restore its forests. Multi-year plans followed. The situation north of the border, however, became particularly acute during the famine of the mid-1990s, which led to hundreds of thousands of deaths.

Known in North Korea as the “Arduous March,” the famine period was characterized by energy shortages that forced many people to depend on wood for fuel, while desperate efforts to produce food led to unsustainable clearing and cultivation of sloped forested land. Further compounded by forest fires, it is estimated that North Korea lost 30 percent of its forest cover between 1990 and 2010.

Already highly vulnerable to natural disasters, North Korea’s depleted forests have exacerbated soil erosion and impaired water retention. This has significantly increased the risk of flash floods and landslides. Flooding in several provinces in August 2018 killed scores, displaced tens of thousands, and damaged infrastructure and arable land. In total, it is estimated more than 6.6 million people have been affected by natural disasters since 2004.

Not only do flooding and drought threaten North Korea’s already precarious food security situation with an estimated 11 million people undernourished, but soil erosion has also decreased the fertility of soils and led to a loss of nutrients on slopes used for crop cultivation.

Other vital ecosystem services that forests provide have also been severely compromised. These range from water purification, providing supplementary foods such as mushrooms and fruit, maintaining biodiversity, mitigating pollution, and carbon capture.

Proceeding under a 10-year plan that started in 2015, the government has mobilized “all-people” spring and autumn campaigns to plant trees covering an area of 1.67 million hectares—roughly the area lost during the famine. According to the Ministry of Land and Environment Protection, the first phase to 2017 involved replanting areas around critical infrastructure such as roads, railways, and village settlements.

Drive along the rutted, bone-jarring highway between Pyongyang and the eastern coastal city of Wonsan, through the country’s mountainous interior, and you are sure to see some of the results of these replanting efforts: newly planted trees forming dense, scraggly patchworks creeping up successive hillsides. Below the steepest slopes, accompanied by signs with slogans exhorting the people to produce more, every available inch of land appears given over to the cultivation of maize, soy, potatoes, and rice. The fragile balance between forest conservation and food production is readily observable.

Central to nationwide reforestation efforts is an ongoing effort to establish large-scale tree nurseries in each of North Korea’s provinces for the cultivation of seedlings. The plan is for each nursery to produce 20 million to 25 million trees annually. Key tree species include pine, maple, larch, pine nut, and acacia, as well as fruit trees for food use.

The Ministry of Land and Environment Protection has also adopted an agro-forestry strategy to reconcile the different goals of conservation and reforestation with the production of food and fuelwood. Accordingly, emphasis has been placed on establishing “hybrid” or multi-use forests in non-forested and low productive forest land. This has involved promoting intercropping by simultaneously planting trees and crops. Educational campaigns have been an important element of teaching people how to better use and manage local forest resources.

The precarious humanitarian situation also poses severe constraints. Wood still constitutes the primary fuel for cooking and heating in rural areas. Despite the use of private kitchen gardens and food markets to alleviate the deficiencies of the public food distribution system, more than 10 million people endure severe food shortages. Furthermore, with farmers officially deterred from cultivating land sloping more than 15 degrees, conservation efforts may collide (or even unravel) with the need for increased food production on the limited land available.

Effective forest management and protection, furthermore, requires significant human, financial, and material resources that are in short supply. While various countries and international organizations, including the FAO and UN Development Programme, have provided technical inputs for better management of its forests, wide-ranging sanctions and the fragile security environment stymie deeper, long-term cooperation. This prevents, for example, the provision of much-needed investments, capacity-building and the import of bio-engineering technologies for modernizing tree nurseries.

Sharing a common forest heritage and interdependence on resilient socioecological systems, South Korea has been particularly keen to engage in inter-Korean forestry cooperation on issues ranging from forest fires and pine beetle infestation to mitigating flood damage—all of which threaten to cross the political divide. But while forest cooperation was stated in the Pyongyang Joint Declaration of September 2018, along with other areas of inter-Korean relations, concrete efforts have stalled.

Half-way through its forest restoration campaign, it would appear that North Korea has achieved some successes, even though obtaining a comprehensive picture of the situation remains difficult due to a lack of information. What’s more obvious is that as climate change considerably raises the risks of food and human insecurity, assiduous afforestation efforts—and enhanced ecological stewardship more generally—must be a key priority for building resilience and securing ordinary people’s livelihoods.